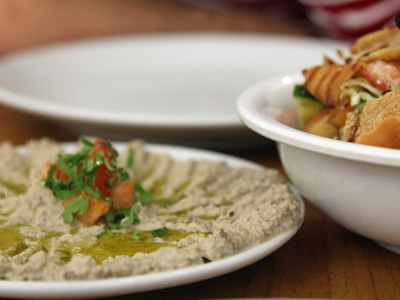 Turkey as a country does not deal in absolutes, even though some of its more bombastic citizens are known to. So when one hears the numerous bewildered complaints about Istanbul’s dearth of falafel and hummus, the correct response is not “Turkish food is not chickpea-compliant,” but “You are not going to the right restaurants.”

There’s a place in Kadıköy that advertises “Gaziantep’s famous chickpea wrap” and then offers the parenthetical “(falafel).” The Fatih district and the Gaziosmanpaşa and Bayrampaşa neighborhoods are dotted with tiled rooms selling künefe, kibbeh and all else Levantine. Or, much as with Vietnamese food in the U.S. [2], one can trust numerology, stopping by restaurants with a 63 (the digits found on license plates issued in southeastern Turkey’s Şanlıurfa) or 27 (Gaziantep) in their name.

That said, there are times when food merely on the Arab-Turkish spectrum will not do. There are times when one has a hankering for Levantine food made by an Arabic-speaker for an Arabic-speaking audience. This feeling is presumably most sharply felt by the members of Istanbul’s growing Syrian refugee population. The market has made room for Syrians longing for a slice of home and perhaps baklava as well, for signage in Arabic promising the beloved tastes of pre-civil-war Damascus or Aleppo. The tastes of Syria are unfortunately in high demand now in Istanbul, but mostly in the neighborhoods where Syrians have coalesced in the past few years. How they’ve come – and how these places taste – is remarkable.