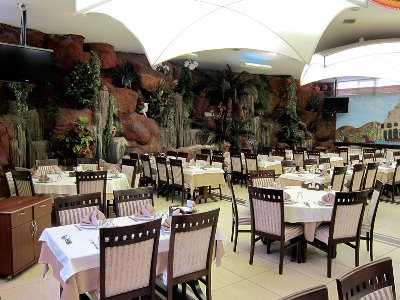 [1]
In our imaginary primetime lineup, a reality show called “Pimp My Kebab Salon” transforms a drab kebab shop into a grill palace suited to the tastes of the latter-day sultans. Surfaces are suddenly gilded in gold, fountains appear and everything is reupholstered under the watchful eye of the boisterous host with tacky taste. If this TV series existed, a much-loved classic episode would take place at Hatay Has Kral Sofrası, a zany kebab restaurant in a part of the Aksaray district filled with lots of other establishments selling food from Southeast Turkey.

As we entered through the hall lined with photos of esteemed guests, our attention hung on the huge grotto at one end of the restaurant, the likes of which we hadn’t seen outside of natural history museums. We won’t even go into the ceramic bas-reliefs of Anatolian construction through the ages featuring Greek temples, Ottoman mosques and soaring office towers that adorn the other walls, or other such subtle details. Let the over-the-topness of the grotto – with its stuffed doe and gurgling brook – stand as a symbol for the glory of all things at Has Kral, including the food.

The rest of this previously published review can be found on CulinaryBackstreets.com, here [2].