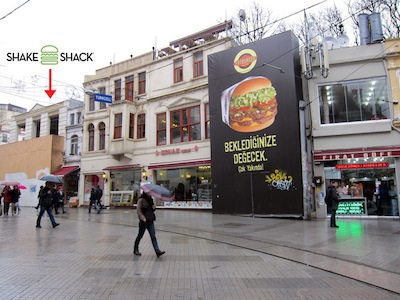 [1]
As we’ve previously chronicled [2], the Tünel end of Istanbul’s famed İstiklal Caddesi was some two years ago the site of a heated burger war. It all started when a former Turkish basketball-player-turned-restaurateur who had spent time studying in California opened up Mano Burger, a mostly successful recreation of the kind of burger joints the owner frequented in the United States. Mano was only in business for a few months when a rival emerged a few doors down in the form of the more upscale Dükkan Burger, part of a mini-chain that was affiliated with what was at the time Istanbul’s trendiest butcher.

For a while the rivalry burned white hot, but then, suddenly, it flamed out. Mano, squeezed between a problematic landlord and Beyoğlu municipal inspectors unhappy about burger smoke wafting over Tünel Square, threw in the towel and closed down [3]. Meanwhile, Dükkan’s business model of charging high prices while continually lowering the quality of the meat it served finally did it in. Tünel had suddenly turned from a sizzling burger battleground into a burger graveyard.

The rest of this new post can be found on CulinaryBackstreets.com, here [4].