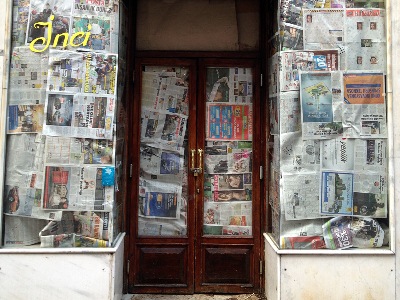 We would have liked to like the profiterol at İnci Pastanesi, and to believe their claim that the profiterol was invented on the premises in the 1940s. But in fact, we’ve always appreciated İnci for non-culinary reasons. Until last week, this old-school Beyoğlu pastry shop had been spooning out cream puffs covered in chocolate goop for almost 70 years with respect for tradition and a refreshing contempt for the latest trends in interior design. Our eyes had grown used to resting on its charmingly worn façade as we walked down İstiklal Caddesi. For better or worse, İnci was an institution.

Last Friday, we were alarmed to see a line of police and several moving trucks blocking our view of İnci. As we got closer and saw the cargo in the back of one truck – crates of eggs, banged-up stainless steel coolers – we realized that İnci was being gutted. It was a painful sight that, for us at least, represented the final chapter in the story of this neighborhood in the last century.

The rest of this post can be found on CulinaryBackstreets.com, here [2].