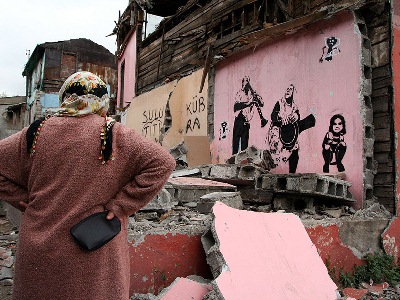 There’s nothing like a debate about “urban renewal” – often touted by municipal governments as a way to repurpose run-down urban areas for gentrification – to work up a good appetite. In a city like Istanbul, a teeming metropolis of 15 million people working to build a modern life among ancient ruins, these discussions seem to occur on every corner.

These days, construction cranes and skyscrapers now crowd a skyline better known for its domes and minarets. As the municipality’s digging machines makes Swiss cheese out of the seven hills upon which Istanbul is built, residents are left wondering what good the resulting traffic tunnels will do when the big earthquake hits. The architectural legacies of the Byzantines and Ottomans have suffered heartbreaking defeats to modernization, including the destruction of the very skin of Istanbul – the Old City walls – parts of which were cleared for a commuter train. But despite these losses, the city remains a vibrant overlay of the old and new where many places seem either just on the cusp of being torn down or of being saved for restoration. Development, for better or worse, moves at a dizzying clip; the situation changes every day, sometimes drastically.

The rest of this feature article can be found on CulinaryBackstreets.com, here [2].