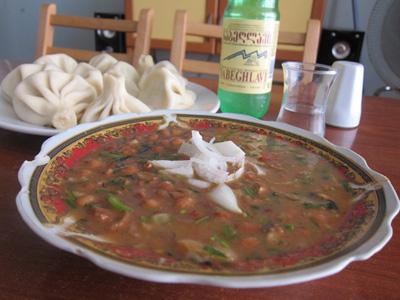 [1]
In a desk drawer at Istanbul Eats HQ is an envelope of leftovers from days when life was less sedentary: Tajik somoni, Kyrgyz som, Cypriot pounds, a wad of Macedonian denar and a small stack of Georgian lari. As with the last bite on the plate, it’s impossible to throw money away, no matter how unstable the currency. But the real value of having it on hand is that it makes a return visit seem likely, even pending.

Our plans to return to Georgia were made, cancelled, rescheduled and cancelled again. It would seem our lari would never be much more than a filthy little memento, an IOU from the National Bank of Georgia for a khachapuri that would never be cashed in.

Then we read about Café Euro [2] – now, sadly, closed – on Delicious Istanbul [3] and felt inspired to head to Aksaray in search of somewhere to spend our lari. We had a hunch that where there was one Georgian restaurant there was bound to be another. We asked a bus driver who had just pulled in from Tbilisi where the hungry Georgians go and he directed us into a small alley of shops and up an AstroTurfed flight of stairs to Café Niko. Those stairs opened onto a wide porch that was also AstroTurfed and filled almost to capacity with Georgian men in beachwear – swimsuits, tank tops, Capri pants and flip-flops – drinking bottles of Tuborg and little Turkish tea glasses filled with chacha, Georgian grape moonshine.

The rest of this review can be found on CulinaryBackstreets.com, here [4].