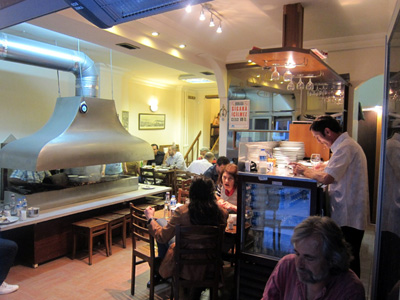 [1]
At 6 p.m. on a Monday evening, the dining room of Adana Ocakbaşı was nearly full and the wide grill in the corner was covered with skewers loaded with meat. While most restaurants, worldwide, were closed or waiting for a slow night to start, this neighborhood kebab house was busting through a bumper rush of early birds in for a quick lamb chop or two on the way home. The dinner crowd had not even arrived.

“This place will ruin you,” said our waiter showing us to two stools at the marble counter that circles the grill, the smoking heart of the room. “You wont be able to eat meat anywhere else.”

The usta behind the grill skewered, slapped, turned, shifted, spiced and plated meat with the concentration of a tantric yogi. When he reached a relatively calm moment in his grilling cycle, he gently mixed a bucketful of sumac and raw, chopped onions with his hands – all of it an awesome sight of endurance. If we were going to be ruined we might as well enjoy the show.

Along with a bottle of rakı, we ordered a couple of starters: an excellent ezme, a relish of finely chopped onions, tomatoes, red peppers and plenty of parsley dressed with olive oil and pomegranate molasses; and közde patlıcan, a whole eggplant grilled until the inside has gone meltingly floppy and then peeled. Served with small fresh rounds of tırnaklı ekmek, a flatbread ubiquitous in kebab houses, the meze clearly play a supporting role to the meat here, but they were simple and delicious.

We soon moved onto the stars of the show, ordering a couple of skewers of just about everything we’d seen on the grill. Small cubes of lamb liver and çöp şiş, tiny bits of marinated beef bookended by slivers of fat, came out first. There is an entire classification of restaurants in Istanbul devoted specifically to grilled liver and çöp şiş and not one of them serves liver as tender and succulent as Adana Ocakbaşı. It would be well worth a visit for the liver alone, but a crime to leave before the parade of bone-in cuts made their way from the grill.

The lamb chops and ribs, liberally dusted in red pepper and thyme, were so juicy they drenched the thin sheet of lavaş beneath, making it all the more palatable. The beyti kebabı – in our favorite rendition, a skewer of Urfa wrapped in lavaş, cut into slices and drizzled with tomato sauce and yogurt – was nothing more than a skewer of Urfa kebab, minimalist for a beyti, but exceptionally tasty.

Already full and hooked on this place, we needed a little something more to tide us over until the next visit.  Scanning the grill, we asked about uykuluk, or sweetbreads, a specialty often found on kebab house menus but rarely in stock. Within minutes our usta was sliding a dozen or so small charred orbs onto a plate for us. Springy in texture, this uykuluk carried a characteristic whiff of organ meat, which stood up well against the spice dusting and the char from the grill. These well-prepared sweetbreads, more than the meat even, were our personal ruination.

Paying the modest bill and leaving the room packed with people feasting on prime cuts of lamb, we felt as if we’d just been initiated into a carnivorous club. We imagined one day having two seats at the grill designated as “our usual” spot. If being “ruined” means becoming a regular here, that’s a fate we welcome.