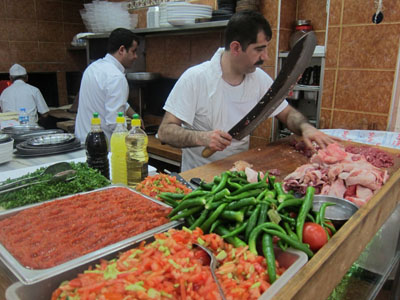 [1]
We’ve committed a lot of space on this blog to identifying the taste, smell and sight of a seriously good kebab, but it was not until we sat in Şeyhmus Kebap Evi (on a tip from chef Gencay over at Meze [2]) that we came to know what delicious kebab actually sounds like.

Had we previously known the sound of the zırh blade’s rhythmic roll over large cuts of lamb, we could have followed our ears through the side streets, past the jewelers near Atik Ali Paşa Mosque to the brisk lunch in progress at this little kebab shop. In his open kitchen, Vakkas Usta works the zırh, a heavy, curved, scimitar-like knife, on a thick wooden slab and it sounds like a steam engine chugging at full speed. Each day starts here with a pile of choice cuts of beef and lamb, the place closing down around 5 p.m. when the meat runs out. It has been that way since the mid-1970s, when Şeyhmus (pronounced “Shay-muhs,” like the Irish poet Heaney) himself was still working the counter.

Vakkas Usta cuts the meat fresh for each kebab depending on the customer’s preferences – fatty or lean, spicy or not – before wetting his hands and working it onto long skewers. We chose the Mardin kebabı (fairly lean and spiked with green peppers) as a nod to the southeastern Turkish hometown of the late Şeyhmus Usta, both of which are celebrated in large framed photos and posters all over the dining room.

Vakkas Usta, working at a frantic speed, barked an order at a young waiter playing with his cell phone. The boy pocketed the phone and quickly came to Vakkas Usta’s side with a napkin and cleaned up shreds of meat that had gone flying from the blade onto nearby tables. (Note to readers: select your table carefully or wear a raincoat.)

We enjoy swordplay at the lunch counter for the sake of entertainment, but a few bites of our Mardin kebabı told us that this was not just a gimmick. The meat used at most kebab shops may be of fine quality, but it has usually been smooshed through a grinder once or twice leaving it a limp, pliable mound. Vakkas’s zırh-cut lamb/beef combo came off of the skewer springy, with great textural variation. At certain points it still seemed to have a grain. People speak of zırh-cut meat having a particularly fresh taste, and we got that. But it was the texture that impressed us most. This kebab made the average streetside Adana look like an Oscar Meyer wiener.

So entranced were we by the properties of this Mardin kebabı – the heavy roll of the zırh on the chopping block, the slap of fresh tırnaklı ekmek (flatbread) coming out of the oven, the sight of meat flying through the air – that we forgot to ask just how it was that an Irishman ended up making kebab in Mardin.