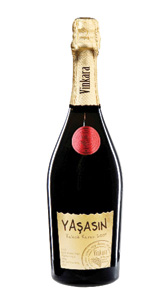 [1]
(Editor’s Note: This post is part of our ongoing “wine chats” with sommelier and oenophile Serdar Kombe. Today he talks about a Turkish sparkling wine that’s actually worth talking about.)

1. A wine expert whose opinion we trust told us that “Turkish bubblies are positively undrinkable!!!” Is that the case? Is Turkey’s terroir not suited for sparkling wines?
Actually making good sparkling wine is related with making good white wine. Turkish wineries are improving their white wine making skills, but there is more to be done. Anyway, sparkling wines have been produced for approximately 40 years in Turkey. Mainly, local grape varieties are being used for the blend and mainly the charmat method [whereby the second fermentation takes place in large vats, rather than in the bottle] is being using for making sparkling wines, althoug this method has not been adapted properly. Whichever winery is making sparkling wine, their first purpose is to make wine, rather than dedicating themselve to making sparkling wine, which always stays in the shadow of still wines. I believe that Turkish wineries are not properly concentrating on making and selling sparkling wine. Another problem is that Turkish people think that it is for celebrations only. They only drink sparkling wine when they are celebrating anniversaries, birthdays etc.

2. That said, you’ve found a new Turkish bubbly that you like. What can you tell us about this one?
Yaşasın sparkling wine is different than the other sparkling wines produced in Turkey, in terms of the technique used to make it, quality, labor etc. They are really focusing on making the best one in Turkey! The producer in question is following Methode Champenoise rules, which is used for making Champagne in the Champagne region of France. The process of making Champagne is quite complicated and you need to be skillful and patient about it. Yaşasın is not as toasty, creamy, yeasty as Champagne. It is a more fruit-driven sparkling wine, but the bubbles are consistent and go up with such a beautiful harmony. It’s refreshing, crisp, zesty, with stone and fruit aromas on the palate.

3. What can you tell us about the winery that produced this bubbly?
The winery, Vinkara, is very young. They started releasing their first commercial wine just 3 years ago. They have a very modern winery that focuses mainly on the native to Turkey “Kalecik Karası” grape, grown in Anatolian vineyards near Ankara. The wines are produced under the control of Marco Manciero, an Italian wine consultant. One of the company’s goals is to take the relatively unknown “Kalecik Karası” grape to a better place.

4. Do you think the arrival of this particular bubbly could signal the arrival of more quality Turkish bubblies?
Absolutely. After the successful introduction of Yaşasın and the positive consumer feed-back, other wine producers have realised that the market is hungry for sparkling wines. We can say that the sparkling wine market of Turkey will be going through a big change within the next 5 years.

5. On what occasions would you drink this bubbly?
I would like to drink it on every occasion! Sparkling wines are known as a celebration drink, but in my opinion it is the best aperatif drink before the start of a meal. Also, it would be a great marriage with shellfish, served in a good seafood restaurant by the sea….