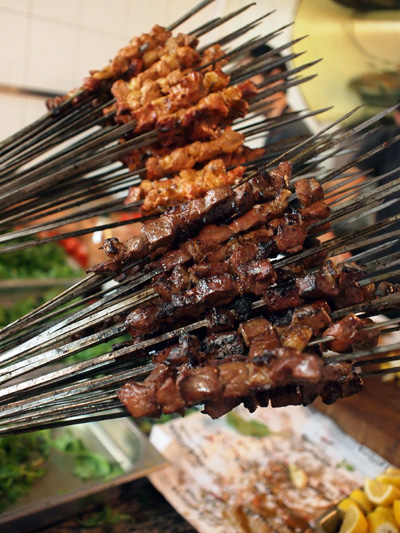 It’s nighttime in Istanbul’s “Little Urfa.” Follow the wail of the Kurdish Frank Sinatra, İbrahim Tatlıses, blasting from a souped-up vintage Fiat. Puzzle over handwritten Arabic signs in the barbershop windows. Sample the essence of Southeast Turkey in the spice shops selling the region’s fiery peppers. And, most of all, marinate in the fragrant smoke that comes from the countless grill houses that line this neighborhood’s streets. These are among the sights, sounds, smells and – most importantly – tastes that are part of an unforgettable guided group dinner in the culinary backstreets of Little Urfa.

Led by members of the Istanbul Eats team, the Kebab Krawl is a carefully curated nighttime feast of traditional Southeastern Turkish cuisine that changes locations with every course, allowing you to take in the best of this atmospheric out-of-the-way ’hood. The Krawl will begin with the gumbo-like masterpiece soup, beyran çorbası, and then detour for skewered liver from a fourth-generation Urfa griller. There will be a stop at a bakery for artisanal lahmacun straight out of the oven and then we’ll belly up to the kebab bar of Veysel Usta, for his exceptionally delicious handmade kebabs, served up with sharp wit. We will not relent until the group has made one more stop, for the neighborhood’s best künefe, a funky pastry of fresh cheese and crispy shredded wheat spiked with Antep pistachios. As it rolls along, the Kebab Krawl will also make stops at other local food and spice shops for a further taste of local flavor.

Less a tour than an organized movable feast for the hungry and intrepid, the Kebab Krawl may not replace a bus ticket to Urfa, but it’s the next best thing.

The Kebab Krawl will be offered regularly starting in February. Please contact us at isteatswalks@gmail.com [2] for more details.