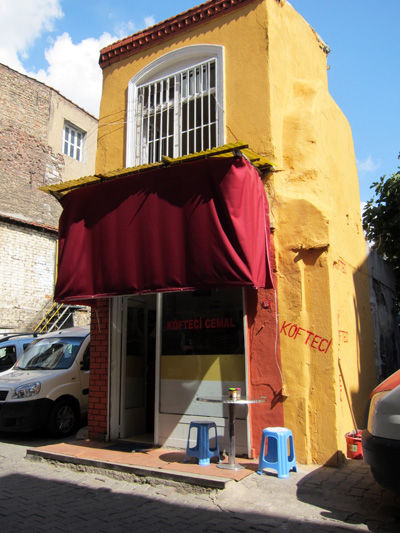 [1]
In the category of ambience, Köfteci Cemal scores high marks quite effortlessly. On a street of mostly demolished row shops down in Karaköy’s Perşembe Pazarı hardware market, Cemal makes his presence known with a bright yellow paint job and the word köfteci spray-painted on the front, back and sides of his building, in case his patrons forget where the place is located. There’s little chance of that happening, though. “We’ve got history down here,” said grill master Hakkı Bey, reflecting on decades of slinging meatballs to hardware vendors and shoppers.

After the initial surprise of stumbling on this little meatball shack, we quickly took a seat outside and settled into the rhythm of the hardware market into which it is tucked. Across the street from Cemal’s stands another tiny shop that sells nothing but black rubber washers, from the gauge of a car wheel down to that of a pencil. As we got ready to eat, a man who had been going shop to shop with a thick bolt in his hand asking where he might find more arrived at the restaurant. Hakkı Bey pointed down the street and slapped his forearm indicating a right turn ahead and watched the man disappear behind a colorful pile of rope coiled up outside of a shop that looked to be perfectly coated in axle grease. This is the stage upon which a typical lunch in Perşembe Pazarı plays out.

Any corner tea stand in this market delivers such vistas, but Köfteci Cemal, of course, also has meatballs. Hakkı Bey hand pats them into loose nuggets, roughly the size and shape of the famous spoonmaker’s diamond in Topkapı Palace. These köftes are a precious commodity around lunchtime, when hungry shopkeepers come over for an order or call Hakkı on his phone by the grill. Shot through with parsley and spiced with black pepper, these are a common form of köfte, but we found that, fresh off the grill, they were as uncommonly soft and as juicy as köfte can be.

Though lacking the secret sauce that got us hooked on Köfteci Hüseyin’s [2] köfte or an outstanding piyaz à la Köfteci Arnavut [3], Köfteci Cemal is still a destination meatball, by our count. The meatballs are well above average, but we see them more as an excuse to gain access to Hakkı Bey and his regulars, who seem to have stepped right out of the black-and-white photos of Ara Güler. And there are rumors that, like the long-gone gritty society depicted in those photos, this hardware market may be lost to another great urban transformation, the Golden Horn Marina project. We like to think that this little meatball shop would survive such a radical transformation, but without his regulars – men who wear coveralls, not Top-Siders – Hakkı is not likely to carry on. But, at least for now, the writing on the wall still says “köfteci.”