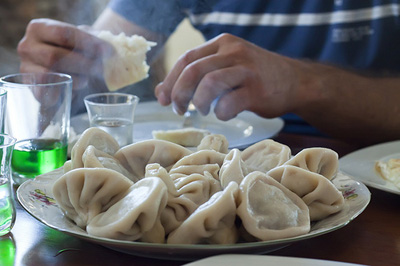 [1]
(Editor’s Note: This guest post was provided to us by Olga Tikhonova, who writes a wonderful blog [2] about Istanbul food and life in Turkey. To her credit, Olga has managed to track down what had long been a holy grail for Istanbul chowhounds: a local restaurant serving authentic Georgian food.)

For a while I have been skeptical about ethnic food in Istanbul: local tastes usually turned any restaurant serving foreign cuisine into something that was only a slight modification of traditional Turkish food. Yet recently I discovered a Georgian eatery producing authentic flavors without worrying too much about local tastes.

Emniyet Garajı, the massive bus terminal in Aksaray, sees hundreds of people coming and going every day from Georgia. Around the bus terminal you will find the essential infrastructure in place: ticket offices of bus companies, currency exchange booths and a few eateries. Everyone speaks Georgian. “It’s like a little Georgia here,” says Maho, a Georgian friend of mine. Georgia is only 24 hours and $50 away, which sounds like a good deal to Maho’s countrymen, attracted to Turkey by the poor economic situation in their country. Many are happy to make the trip to Istanbul and take up a seasonal job here to support their families back home.

I met Maho through some local friends and before yet another visa run he invited us to a restaurant. Sitting down for a meal and a few drinks is a big deal in Georgia, with arrivals and departures of all sorts being mandatory occasions to do so.   A five-minute walk away from Emniyet Garajı we stumbled upon a spot graced with a sign that said “Cafe Euro.” While I considered heading onwards, Maho pulled me by the sleeve. “Here we are!” he said. We entered a place with a couple of simple tables and chairs occupied by a bunch of smoking men. Dyed-blond hostess Eka behind the counter cheek-kissed with Maho, indicating a certain familiarity between the two.

“My cousin used to work here. Was good money, you know,” Maho explained. “Why did she leave?” I asked. “She was tired of drunken brawls and fights on weekends,” he replied. I thought of a dramatic difference between an ethnic eatery that interprets foreign flavors for the enjoyment of the local public and a place that serves the original thing to immigrants. Cafe Euro has clearly got enough publicity among Georgians in Istanbul not to worry about catering to locals.

Meanwhile, things started materialize on the table. First came the plates, knifes, forks, water glasses and tiny tea glasses with no tea. A small plastic bottle of a transparent liquid arrived. Maho opened it and poured some into the tea glasses. If you are familiar with the concept of homemade vodka you may be interested in trying chacha, proudly brewed in each self-respecting Georgian household. Otherwise you should stick to something commercially produced – such as tarkhun. Tarkhun is a carbonated drink deep-green in color based on the extract of tarragon, a green plant with a slight hint of anise. Tarkhun is the invention of a Georgian pharmacist in late 19th century that got a new life as a mass-produced carbonated drink in the Soviet Union. The drink was our Sprite, just million times better, if you ask me.

Soon the food started arriving. There is no menu at Cafe Euro: just like any Georgian restaurant it features the same range of specialties and assumes you know what you want.  First came khachapuri, Georgian savory pies that immediately showcased both the simplicity of the flavors and the heights of the cook’s skills. Piping hot, they are sliced into segments, revealing the generous quantity of cottage cheese stuffed inside. The leavened dough tastes just like a grandma would make – a little sour and nicely buttery. A couple of bites in, I was perfectly full and happy about having submitted to Maho’s requests that I  come here. Then the lobio arrived.

Lobio is a Georgian bean dish that can be served as a side dish or as a stew. Either way, the dish is made up of a combination of red kidney beans, tender cilantro and the tangy touch of garlic. The garlic bites your palate, while the beans smooth things over and the smell of cilantro adds sophistication. Cafe Euro made a hearty side verion of lobio and after eating one serving I thought I couldn’t eat any more that night. And then the khinkali arrived.

Khinkali are Georgian dumplings featuring assorted stuffings of either minced meat, potatoes or cottage cheese (with meat being definitely the most popular). While belonging to the same family as Turkish mantı, khinkali provide a different eating experience. Think of them as dough sacks the size of a large fig that hide a significant amount of meat inside. The dough puffs as it boils and makes space for a delicious broth to develop inside. The idea is to eat khinkali without losing any of the broth. Just like figs, khinkali have a little neat tail on top. You grab them by this tail, turn the dumpling upside down and take a small bite from the side where the broth has collected (careful, it’s very hot). The ladies at Cafe Euro clearly know what they are doing as the dough is thin, the meat plenty and the broth delicious.

“There are a few other Georgian places around but everyone comes here,” Maho notes with satisfaction after the third shot of chacha. I could see why. Cafe Euro is probably not the place you would like to end up in on a Saturday or Sunday night – unless you are in a mood for watching a chacha-fueled fight (no kidding). But this is exactly why Cafe Euro remains such a well-kept secret. It’s a Georgian cafe proud enough not to care about local tastes.