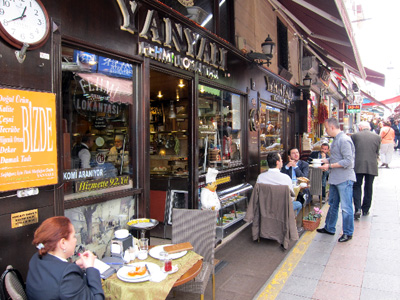 [1]
For a hungry person in search of the culinary backstreets, an initial look at Yanyalı Fehmi Lokantası, a restaurant at the mouth of the Kadıköy market, does not inspire much confidence. By the door stands a chintzy plaster statue of a chef in a poofy hat holding his paunch. A clock more suited to a classroom hangs outside by an empty flagpole. A riot of signage – stickers, banners, brass plaques – all in different typefaces speaks not of the food but of the hygienic atmosphere and noteworthy décor found inside.

Just walk on by to nearby Çiya, your instinct might tell you. But that would be a grave miscalculation. Started in 1919 by Fehmi Bey, a refugee from Greece, this restaurant has been run by his descendants for three generations, preserving the founder’s recipes. Serving mainstream favorites and hard-to-find specialties, this is a place steeped in the history and the cuisine of Istanbul. It may look like a typical esnaf lokantası (“tradesmen’s restaurant”), if a wacky one, but there is much stored in the culinary memory bank of this place.

There are two ways to approach the imposing steam table here. One option is to go with the recognizable classics, such as kuzu tandır (lamb baked in a brick oven) or the Turkish spin on meatloaf, Dalyan köfte. Or you can take the route less traveled, the offal way, as we did on one recent lunch that started with a rich and garlicky bowl of trotter soup. We found this soup, which is locally prescribed as a hangover cure, to be equally soothing if you’re stone-cold sober. Moving through the courses, rather than the same old buttery rice with a drizzle of baked beans over top, we went with the rapturous içli pilav, one of Turkey’s most artful, and delicious, rice dishes. At Fehmi it was loaded down with currants and laced with little pieces of liver.

Back at the steam table, where we went to select our main course, the usta went over the options again for us, his voice muffled by a surgical mask. What was that he said? Ciğer sarma? Stuffed liver? While our intellect wrestled with how a liver would be stuffed and with what, our stomach took over and said, “Evet.” Giddy with excitement over the possibility of finding a new favorite dish – anything stuffed with liver or liver stuffed with anything is a really promising start – we returned to the table followed by a waiter in bow tie and vest carrying our trophy dish.

What was on our plate was lightly browned over the top, with an egg sauce, we later learned. The underside was like drenched bread, becoming one with the inside. It gave way easily to the fork, releasing what looked like içli pilav and cubed liver into the thin pink juice on the plate. But the big difference here is the casing of this sarma, kuzu gömlek, which translates to “the sheep’s shirt.” This is the caul fat, a thin webby membrane that protects the internal organs of a milk-fed lamb. In Fehmi Usta’s day, this gömlek would come along once a year so it was a somewhat precious article; consequently, ciğer sarma was traditionally a seasonal dish.

Today, kuzu ciğer sarma is on the menu at Fehmi every day, and, as far as we can tell, it is the holy grail of the menu. As we sopped up the juice in our plate after devouring the rich sarma, swearing that the Turks had figured out how to make liver tastier than the French with their foie gras (sorry, we get a little carried away sometimes), the manager and son of Fehmi came over to see how we liked the dish. We told him that we thought we’d found our new favorite liver preparation and thanked him for it.

Taking a second look at the place on the way out, we made mental note of the coordinates. Yanyalı Fehmi is not a replacement for the Kadiköy magic of Çiya [2], but it is an excellent supplement.