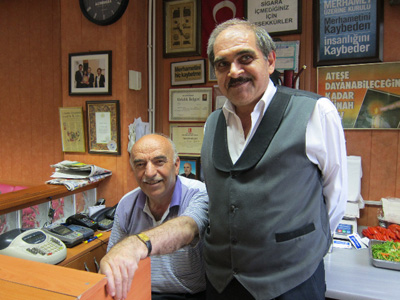 [1]
For an Istanbul restaurateur, to count among your regulars a cadre of doctors appears to be a sign of achievement worth bragging about. Among the many restaurant tips we have received is one that led us to the subterranean İlkadım Lokantası, backed up by the promise that doctors are known to eat there. In fact, at lunchtime at İlkadim, a humble esnaf lokantası in the Çapa district, there were so many doctors, medical technicians and pharmacists that it seemed that there was a “lab coat required” policy in effect.

Located across the street from Çapa General Hospital since 1975, İlkadım’s dining room is carefully – if a bit grumpily – attended to by career waiter Mustafa Nalbant, who has worked there since opening day. Owner Osman Bilgin said of Mustafa Bey, “He has a diploma in waiting tables.”

So rather than pick from the dozen or so mounds of roasted meats, vegetables, pilavs and stews at the open kitchen, we consulted Mustafa Bey for advice. What are all those doctors eating?

And what is Mustafa’s personal favorite?

Our prescription was written. How could we order anything else?

We agreed to the hünkar beğendi and asked to start with an esnaf classic, Arnavut ciğeri (“Albanian liver”), and one kadınbudu köfte, a battered and fried patty of meat and rice that we find irresistible. On its own, the kadınbudu was not spectacular, but the liver and cubed potatoes glowed orange with that magical combination of pepper paste, onions and oil. The liver was soft and its light breading held firm against the spicy bath. In this case, the gravy made the liver and even lent a hand to its neighbor on the plate, the kadınbudu köfte. This was all a fine start and well worth the trip if you are a doctor across the street at the hospital. But it takes more than a tasty liver to get us on the tramvay during the lunch rush.

The name “hünkar beğendi” means “the sultan liked it” and, with a name like that, imaginations run wild both in the kitchen and the dining room (speculation on the origins of the name and a recipe here [2]). We’ve had it served in elaborate copper bowls, the eggplant so overdone with cheese that each bite stretched out from the vessel like a bite of pizza. But the chef at İlkadım is not dreaming of sultans and palace kitchens. He knows his clients don’t want too much cream and cheese in their eggplant beğendi. The slow-roasted lamb should not be too fatty or obscured by anything, even a garnish. This is a stripped-down, simplified hünkar beğendi – maybe more suited to a citizen than a sultan – but in our opinion, one of the best in town. The lamb was fork-tender and totally clean in flavor, offset by the eggplant, which was so smoky you’d think it was prepared using Scottish peat. Delicious, in a word.

If the Sultan doesn’t love this one, he deserves to be deposed. Doctor’s orders.