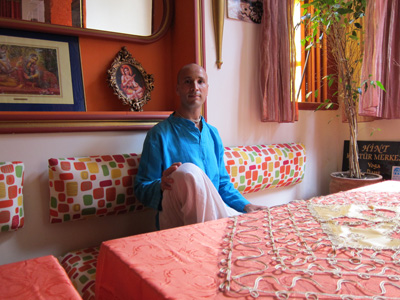 Step out of the dingy stairwell of the Rumeli Han and into Govinda’s Vejeteryan Evi and you will feel as if you’ve crossed a cosmic divide. The warm and cozy room has café tables, pillowed floor seating, walls covered with a friendly looking blue deity and gentle chants that play over the sound system. The color palette at this Indian vegetarian restaurant is dominated by orange and yellow, as if the high exposed brick walls and handsome old wooden doors were painted with vindaloo sauce and saffron. We’ve written before [2] about the parallel universe that exists in the Taksim area’s Rumeli Han – oddball shops, anarchist bars – and Govinda’s, which is run by members of the Hare Krishna movement, fits right in. But beyond the novelty of the place, there are genuine good intentions and a menu that offers some variety to the offerings of the typical Beyoğlu esnaf restaurant.

“The thali system says the body should get five flavors to create a peaceful, balanced mental and physical state,” said Balarama, founder of Govinda and of the next-door Indian Cultural Center, who greeted us upon arrival with a smile and a slight bow, his hands pressed together.

Thali, the ubiquitous Indian lunch, is a sort of subcontinental value meal that includes four or five small bowls of food. One recent day, the thali at Govinda’s consisted of an excellent stewed eggplant with tomatoes and onions, zucchini soup, rice cooked with carrots and crowned with a little pakora, a green salad and little cookies flecked with raisins. In the eggplant dish and zucchini soup we felt the hint of Indian spicing without being overwhelmed, as if the cook were rationing from a dwindling stash of garam masala. Balarama told us the cook didn’t favor heavily spiced food, but that upon request, she could be convinced otherwise. We’ll return with that in mind.

Don’t go to Govinda’s expecting an encyclopedic menu of Indian cuisine. The daily thali menu is all they serve, but the food is always fresh and accomplishes much in five flavors. This is a humble, honest operation that is vegetarian primarily and Indian incidentally. At only 9 TL for the thali menu, the only thing out of balance is all that leftover lunch money jingling around in your pocket.