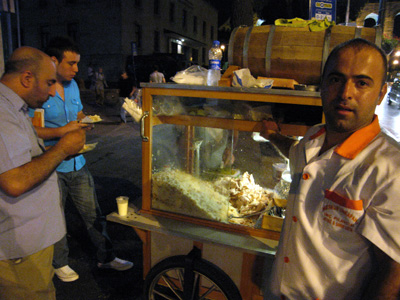 [1]
One recent late night, zipping down a busy Istanbul thoroughfare in a taxi on our way home from the airport, we passed by an intriguing scene. Huddled around a brightly lit food cart was a large group of men stuffing their faces in a kind of zombie-like frenzy. It almost looked like a scene out of Night of the Living Dead. What were they eating?

There are probably hundreds of pilav carts crisscrossing Istanbul every day, but this one seemed different. While the owners of other carts usually roll along trolling for business, this one stays put every night, letting the crowds come to him. “We’ve been in the same spot for 15 years,” said the cart’s operator, a hardworking man in a starched white chef’s smock, who would only give his first name, Ayvaz, for fear of getting in trouble with the authorities. “We’re famous – that’s why there’s always a crowd here.” (Click here [2] to read the rest of this archived review.)