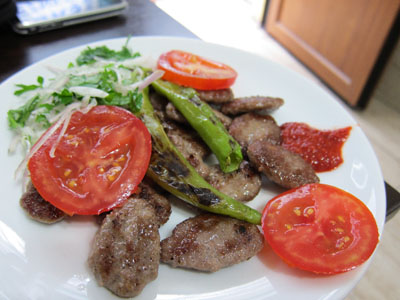 [1]
From a seat on the deck of a Bosphorus ferry, the little neighborhoods of the Asian side seem to have the same idyllic layout: a platoon of fisherman with long casting rods on either side of a small white boat dock in the foreground; a minaret poking through the foliage of a giant sycamore growing behind it and which shares a square with the outdoor seating of the neighborhood fish restaurant.

In this picture, anything but fresh grilled fish would seem incongruous. But hop off the boat in Çengelköy, for example, and you’ll find a very different culinary world in the backstreets beyond the dock. Among other things, you’ll find köfte. In fact, people in Çengelköy seem to have been eating köfte, quite happily, at Recep Usta Köfteci since the 1970s.

Köfte comes in many forms, each with its own title: lastik köfte, İnegöl köfte, ev köfte and, like the ones at Recep Usta, tükrük köfte. The term tükrük, meaning saliva, comes from a slightly stomach-churning popular urban legend that the street cart köfte vendors outside of Beşiktaş Stadium spit on their hands before shaping their meatballs. All the same, köfte that resembles those street meatballs in size and shape – spit or no spit – is categorized as tükrük köfte, as is the fantastic köfte at Recep Usta.

We happen to love eating tükrük köfte sandwiches outside of the stadium. (Indeed, it’s about the only part of a Beşiktaş soccer match that we do enjoy.) So it was pleasantly surprising to see our old game day meal on a plate alongside a pile of onions and a dollop of red pepper sauce. But the resemblance stopped there. If Beşiktaş Stadium köfte is the canned tuna fish of meatballs, then Recep Usta is serving sushi-grade.

On the way out, we asked Yavuz Bey, son of founder Recep Usta, how he’d categorize his excellent meatballs. “Recep Usta köftesi,” he said, then and there, creating a new category of meatball (and cleverly avoiding any reference to bodily fluids). Smart move.