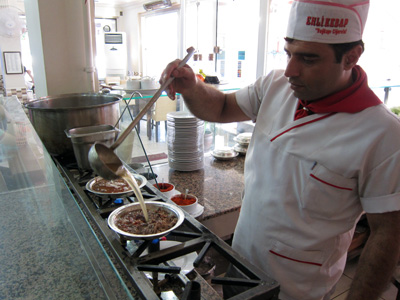 [1]
Southeastern Turkey’s culinary mecca of Gaziantep is best known for its baklava and kebabs. But lately we’ve been thinking that it’s soup that may actually be the city’s real crowning glory. Not just any old soup, mind you, but beyran çorbası, a stupendously delicious lamb-based broth that is usually slurped down for breakfast in Gaziantep.

Although this soup is probably best drunk at its source, we’ve recently come across a spot in Istanbul that serves up a very fine bowl of beyran – and not just for breakfast. Located in the bustling Aksaray neighborhood, Ehli Kebap is a grill house whose advertised specialty is skewered liver in the style of Diyarbakır, a city a few hours to the east of Gaziantep. But tucked into the restaurant’s corner is a soup master with some serious Gaziantep chops who has his own cooking station – gaily festooned with strings of dried red peppers – devoted to making beyran.

Each serving of soup is made to order, cooked up inside its own metal bowl, the usta creating it like a kind of hot and soupy ice cream sundae. First up is a schmear of suet, the shortening-like fat found around the kidney of a sheep, to give the soup some silkiness. Piled on top of that is a mound of white rice and strands of lamb meat that has been slow-cooked for hours, until it is utterly tender, which together give the soup its heft. To ratchet up the taste, the usta then adds a dollop of minced garlic to the bowl and tops the whole thing with liberal sprinkles of light and dark red-pepper flakes. The bowl is then put on a blazing gas burner and a ladleful of broth of an unfathomable depth of flavor is added to it, the whole thing coming to a quick boil. By the time the beyran soup arrives at the table, it has achieved a lovely rusty red color, looking – and even tasting – something like a Turkish version of a Louisiana gumbo.

We generally don’t get too excited about soup, but recent visits to Ehli Kebap to sample their beyran have left us thinking that this may be among the finest soups we’ve had in town, something we would be more than happy to slurp down on a daily basis – breakfast, lunch or dinner.