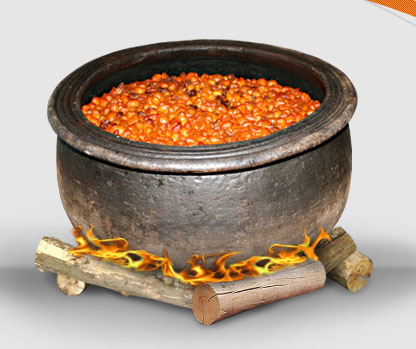 (Editor’s Note: This week we are celebrating the white bean, that humble legume that reaches levels of incredible complexity and flavor when in the hands of Turkish cooks. Until we visited some of Istanbul’s shrines to the baked bean, we generally regarded the dish as something eaten out of a can beside railroad tracks. But Turkey takes this humble food, known as “kuru fasulye,” seriously; that means chefs in tall toques carefully ladling out golden beans in a rich red gravy onto monogrammed flatware, served by waiters wearing bowties and vests. Even in the least formal of Istanbul’s beaneries, the guy manning the pot has the air of a high priest knowing that his incantations alone conjure something unusually delicious out of a simple bean. This is no hobo fare. This week, to celebrate the bean, we are counting down our five favorite places in Istanbul to get “kuru fasulye.”)

At Çömlek you can’t miss the huge red clay cauldron sitting behind the counter. The fellow with the big ladle says it’s the pot that makes these beans better than the rest. Cooking vessel aside, a serving of these beans also has the highest meat count of any place we’ve visited in Istanbul. Whereas most beans might have a shred or at best a few nuggets of tender roasted beef in there for flavor, Çömlek’s are crowned by generous helping of meat. In such a rich dish the meat offsets the cloying beans satisfyingly, leaving the meek still able to walk away and the strong-willed able order up another half portion. The restaurant, located on the wooded slopes above Üsküdar on the Asian side, is a bit out of the way. But for us, these are beans at their best and worth the trip.