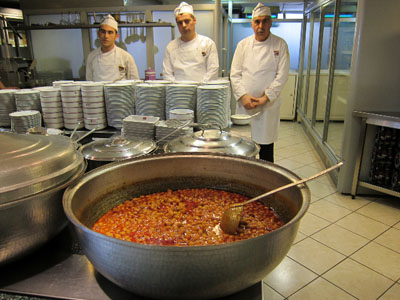 [1]
(Editor’s Note: This week we are celebrating the white bean, that humble legume that reaches levels of incredible complexity and flavor when in the hands of Turkish cooks. Until we visited some of Istanbul’s shrines to the baked bean, we generally regarded the dish as something eaten out of a can beside railroad tracks. But Turkey takes this humble food, known as “kuru fasulye,” seriously; that means chefs in tall toques carefully ladling out golden beans in a rich red gravy onto monogrammed flatware, served by waiters wearing bowties and vests. Even in the least formal of Istanbul’s beaneries, the guy manning the pot has the air of a high priest knowing that his incantations alone conjure something unusually delicious out of a simple bean. This is no hobo fare. This week, to celebrate the bean, we are counting down our five favorite places in Istanbul to get kuru fasulye.)

A severe man in a monogrammed blazer and slacks stands at the door of Hüsrev, greeting patrons with a nod and an open-palmed, sweeping gesture toward the dining room. Heels click across the polished marble floor as important men and women walk in and check their coats without pausing from their telephone conversations. Eavesdrop and you’ll probably overhear the finishing touches on a deal to build a Turkish spacecraft or the purchase of one of the Bosphorus bridges.

It’s easy to get caught up in the charged atmosphere of Hüsrev – overstuffed high-roller booths line the walls that lead out to a vast atrium where everyone appears in their prime and dressed for it – enough to make you forget that everyone has just ordered nothing more than a bowl of beans accompanied by a salty yogurt drink. But that is what’s so pleasurable about Hüsrev: it’s a familiar plot with an unusual Turkish twist. From Hong Kong to Houston, a high-powered business lunch is propelled by a big steak and stiff drinks, but not in Türkiye. Here, deals are sealed over beans.

The beans at Hüsrev are certainly worthy of their dedicated following. Eating a serving of the blond and creamy beans bathing in a rich, red gravy, we got the feeling that every variable in the recipe is tightly controlled by a board of ustas in white coats.

With such resources committed solely to making beans, how could this not be the best bean in Turkey or the world? Hüsrev’s logo features the globe indicating international triumph and they do claim to be the “world’s bean gentleman.” What would the cassoulet-loving French say about that? Or Cairenes about their beloved ful?

Concentrating deeply on the beans before us, we could not identify a single flaw in this bowl of beans. These very well could be the best beans in the city, but, truthfully, we were a little disappointed to find them only delicious. We were hoping for magic beans – ones that would transform us into rich and successful people like everyone else at Hüsrev. But even at 9.50 TL, the most expensive beans we’ve ever eaten, we weren’t that that much poorer leaving the place.