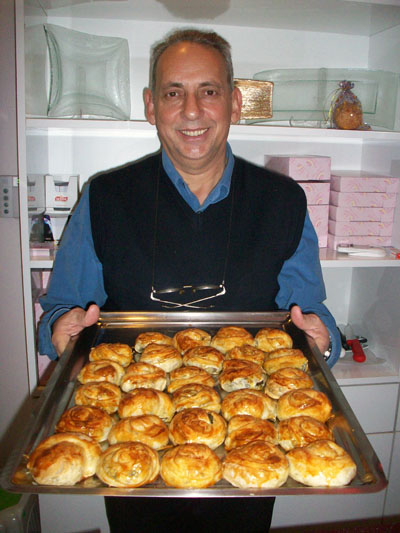 [1]
(Editor’s Note: Intrepid traveler and eater Sherri Cohen recently gave us the goods on the Tekirdağ köfte scene [2]. Today, once again on the road, she brings us news of the historic rebirth of an almost extinct street snack in Izmir.)

The denizens of Izmir like to think of themselves as the Istanbulites’ laid-back counterparts. Life is slower, relationships more intimate on the Aegean. Street food in Izmir is different, too. There, the simit shrinks and calls itself gevrek; kumru, rolls stuffed with beyaz penir and tomatoes, multiply and bloom spicy green pepper stems. And the poğaca’s got a new relative: an oily, plain circular bun called boyoz.

Boyoz doesn’t look or sound like a Turkish word and it originally wasn’t. The buns arrived from Spain with Izmir’s Sephardic Jewish population in the early 1500s, and the city’s Sephardim still use Ladino, their fascinating medieval Spanish-based language of exile, to describe the wide world of boyoz (or boyos, depending on which Jewish cooking source you consult). Similar to börek in ingredients and preparation, a Sephardic boyoz was made with only one thin dough layer wrapped in different patterns around varied fillings: a boyoz de handrajo (literally, handrag, actually a cooked eggplant/zucchini mixture) was square-shaped, while a boyoz de espinaka (spinach) was pinwheel-shaped or circular and a boyoz de patata (potato) was triangular. The filled pastries were oven-baked until golden. No one is quite sure when boyoz passed from Sephardic to general consumption, but somehow during the centuries-long interchange of Sephardic and Turkish İzmirli cultures, delicate fillings were traded for more dough and significantly more grease. My first sample of streetcart boyoz was disappointing: doughy, bland and so oil-soaked I could wave to my friend through the wax wrapping paper.

What happened to the Sephardic boyoz of lore? Some well-placed questions among Izmir’s close-knit Jewish community group La Liga elicited memories of mama’s perfect handrajo and quaffs about the buns being peddled on the street. You can still by traditional filled boyoz, I was told. They’re made at home by women producing kilos for personal orders. But for a small breakfast bite? “Go to Oret’s,” they said.

I was taken to Patisserie d’Oret one afternoon by a friend who helped me shout quick questions to the eponymous owner while she raced around the pink-hued bakery stuffing takeout boxes, refilling trays and chatting with customers. Her curly red hair escaped its loose ponytail as she told me her story. Oret Abulafya was a kilo-producing boyoz phenom who thought of opening her own storefront for years, one in which she could sell sweet and savory Turkish pastries as well as the perfected versions of her mother-in-law’s Sephardic recipes. After 10 years of dreaming and planning, Oret and husband David opened Patisserie d’Oret in spring 2010 on a main street in Alsancak, the busiest, classiest neighborhood of Izmir, and also where the majority of the city’s Sephardim live. A small replica of the Ten Commandments in Hebrew almost escapes a quick glance, hidden between trays of food on pastel-painted shelves. Her customer base, however, reflects the multicultural history of Izmir, and Jews, Muslims and everyone in between make daily trips for a snack. She did admit that it took a bit of cajoling to convince some customers of the legitimacy of the Sephardic filled boyoz, but once converted they never looked back.

The recipe is simple: a dough of flour, water, salt, a bit of sunflower oil and a dash of lemon juice is formed into little balls, which soak in an oil bath for an hour. Afterwards, the balls are hand-rolled thin, to the thickness of skin (Oret’s words), then wrapped around the filling, shaped accordingly and baked. But by my midafternoon visit they were past their prime. “Come back tomorrow morning,” she said as she cut into a pan of dulse de bimbriyo (Sephardic quince sweets), “when they’re fresh.”

I returned to the patisserie early the next day for breakfast. A quiet young assistant was busy filling trays with freshly baked almond crescent cookies when co-owner David emerged from the back. In Ladino, David told me Oret was busy transporting pastries between the off-site baking facility and the patisserie and that I should please eat, eat, I look so skinny. From the gleaming browned buns in the window display, I chose a circular boyoz de handrajo, and after a brief hesitation, snagged a large, brown huevo haminado (slow-roasted egg) from the register-side wire basket for a complete meal. The first bite of delicate handrajo was a pleasure, the eggplant and zucchini stewed in a mixture of tomato paste, onion, salt and a hint of tulum cheese, and almost melting into the dough and light coating of oil, which enveloped my tongue in a dainty, velvety layer. I alternated bites of boyoz with huevo haminado, a hard-boiled egg slow-cooked in a pot along with onion skin and pepper until the white of the egg turned a vibrant roasted brown and tasted almost caramelized. Although I was satisfied, David tempted me into trying a boyoz de espinaka, whose deep green filling, visible through the paper-thin dough, delivered substantial mouthfuls of unadulterated cooked spinach.

There was love in this food; here was the depth of taste and soul that was missing from the nondescript streetcart offerings. Patisserie d’Oret also sells coiled börek and irresistibly poppable mini borekitas which carry the same fillings, but there’s something uniquely Izmir about the boyoz bun that’ll make you stray from your börek habit. Potato and cheese is their bestseller, and give their rose-shaped tahini bun a taste, too. But it’d be a shame to skip their wide selection of Sephardic treats. For an afternoon sugar rush, try the above-mentioned smooth dulse de bimbriyo, mogado (chunky and chewy almond paste) or travado (walnut and cinnamon treats), or make it a full lunch with a plate of raisin-filled yaprak sarma. A wide selection of salty and sweet cookies line the shelves, too, along with a killer tiramisu. Whatever you choose, include a “buenos diyas” and a wink after your “merhaba” to Oret and David and don’t rush through your food – you’re in Izmir, after all.

Ladino to Turkish to English guide