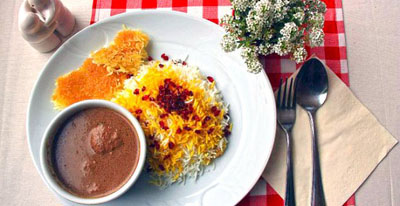 [1]
(Editor’s Note: This guest post is by Jeffrey Gibbs, an American writer and teacher living in Kadikoy whose personal blog can be found here [2].)
(Editor’s Note II: Sadly, this spot is no longer open. According to their website [3], the owner has moved the operation to Montreal, Canada. If you’re interested in trying Iranian food, check this place [4] out.)

I stumbled home from a day of managing wild middle schoolers and started to open the fridge for a medicating Efes Dark only to find a magnet near the handle that read, “Gilan Cafe, Iranian Cuisine. Kadıköy.”

I did a double take. Yes, yes, it said Iranian. Iranian! How long have I searched for a decent Iranian restaurant in Istanbul? The address was just up the road and so my fiance and I hit the sidewalk and after about five measly minutes, found the unpreposssessing little cafe tucked among the apartment buildings of the Acibadem neighborhood.

The cafe had an outdoor patio with heaters and a cozy room inside simply decorated with red table clothes and pictures of Persopolis. Among Darius’s ruins, a new display of framed newspaper clippings sang the praises of the little restaurant. In the background, Iranian music by the famous Persian musician, Hayde, played from a laptop manned by our waiter.

We were soon met by Fetihan, a sharp, down-to-earth woman who had lived for thirty years with her Iranian husband in the Gilan province of Iran (thus the restaurant’s name). “It was like the Iranian Black Sea,” she told us. “With the blue water of the Caspian Sea in front of you and the mountains at your back. Ahhh, a gorgeous place.” We ordered a starter of “Ashe Doogh”—billed as “Ayran Soup” in Turkish. It was a hearty, creamy yogurt based soup with tiny meat balls, fava beans, rice, and a hint of herbs. A swirl of bright green thyme oil adorned the top. Fetihan also brought out a complimentary salad of mint, cucumbers and tomatoes with a basket of thin lavash bread.

For my main dish, I order fesenjan, a rich walnut and pomengranate sauce over slow cooked köfte. It is served, as is everything else, with a plate of Persian rice. My fiance goes with ghormeh sebze, a creamy spinach based dish that reminds me of Indian saag. It has chicken, peas, and tiny köfte, with a rich sauce flavored with dill, cumin, and a diminuitive Persian lime.

“All of my ingredient from the spices to the lime come directly from Iran,” Fetihan explains. “You can’t find this kind of rice in Turkey.”

The rice was wonderful—a pillow of white with a sprinkling of bright yellow grains flavored with saffron. Unlike Turkish rice, our hostess tells us, Persian rice is cooked without oil because you are supposed to pour the sauces of your main dish on top. For drinks, we had Iranian ayran, a chilled version of Turkey’s classic yogurt drink flavored with crushed herbs. It was light, creamy, and refreshing.

My fiance, being Kurdish, pointed out all the similarities between the Persian dishes and Kurdish ones. One menu item is called Ab Ghosht, in Kurdish Av Goşt—“Meat in Sauce.” The dessert was Zerde—“yellow” in both Kurdish and Farsi. We ordered one and found ourselves treated to a bowl of a saffron flavored custard topped with pomengranate seeds and green pistachios. As with a Turkish meal, our Iranian one was finished off with a glass of hot tea.

The second time we went, Fetihan’s son was on hand. His enthusiasm and knowledge of Iranian ingredients and culture was infectious. He had set up a traditional Newroz table in the front of the restaurant with the 7 S’s, as he called them, or haft sin in Farsi. The sacred seven include sir (garlic), somaq (sumak), sib (apples), and senjed an Iranian fruit symbolizing love. He also brought out a bowl of candy coated coriander seeds which had a wonderful flavor when eaten with the strong Persian tea.

The restaurant may not be located in the heart of Istanbul, but it’s easily reached with a minibus or a taxi from Kadıköy wharf—or by a twenty minute walk (it’s near the Kadıköy Carrefour). It’s worth the journey; Fetihan puts a level of care into her creations that is reminiscent of Çiya.

Good international cuisine in Istanbul needs support—there’s so little of it and what exists is often overpriced and overrated. Fetihan serves delicious meals at normal prices with a generous spirit. Go. Eat. Tell others.