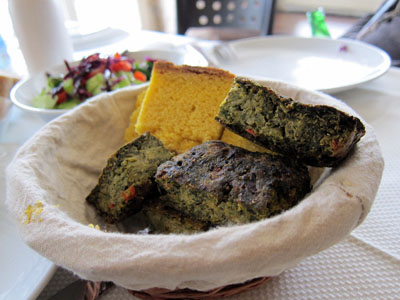 “My heart starts pounding when a pregnant lady enters the room,” said Hüseyin, the artist turned owner/operator of Mohti, a new “Laz Meyhane” in the back of the backstreets of the Asmalımescit area. While this might sound to some like the unsavory confession of a man with an exotic fetish, to us it was a breath of fresh air, redolent with the old-style charm of a classic meyhane patron, something that’s increasingly harder to come across these days.

There was a time when every meyhane around here had a true character at the helm, someone who knew how to work the crowd, comp a drink and indulge in the art of hospitality every night. Now, sadly, as Asmalımescit and other traditional dining zones go upmarket, the only trace of that old-school proprietorship is found in yellowed photos on wall.  In this context, Hüseyin – a boisterous host in an exceedingly sterile market – is almost as odd a fit as Mohti’s concept: thoroughly home-style Black Sea cooking in a meyhane setting.

Hüseyin’s confession was elicited one night recently when we showed up at his meyhane with a pregnant lady in tow. The plan was to have a quick dinner, but Hüseyin (pictured below) wasn’t having that. He wanted to see the pregnant lady moan with delight over multiple courses. So our modest order quickly turned into a Laz tour de force featuring nearly every item on the menu and one, which happened to be our favorite of the night, that was prepared for the kitchen staff’s meal.

In previous reviews [2] of Laz restaurants we’ve stated our belief that the Laz are actually a long-lost clan from Alabama – hence their affinity for what seems like American-style soul food and fiddle music. And like a true Southern diner, the mark of a Black Sea restaurant comes in the breadbasket. If there’s cornbread in that basket, the place is probably legit. At Mohti, the bread offering was set to a higher frequency, with fresh chunks of hamsi ekmek alongside the cornbread. Truth be told, Turkish cornbread can often be a bit dry and dense, but when laced with fresh anchovies, it comes alive, as it did at Mohti. Following the hamsi ekmek came turşu kavurma, a plate of sautéed pickled vegetables, and a Black Sea garden omelet made with kale, leeks and hamsi filets called kaygana. A skillet of muhlama [3] – a fondue-like dish made out of cheese melted in clarified butter – followed, requiring us to pull and stretch the long glistening strands of cheese, which we wound up on a fork as if they were pasta.

And then came the surprise final course in the form of large steaming dumplings. Before Hüseyin said the word khinkali, we were already having flashbacks of Georgian feasts we’d enjoyed in Tbilisi, Moscow and Tashkent. Even if dumplings are simple and standard in construction, they always leave a strong impression on us. Dumplings, particularly Georgian ones, have personality and Mohti’s bulky fragrant bundles filled with coarsely ground lamb and stock were supremely evocative of the Caucasus. 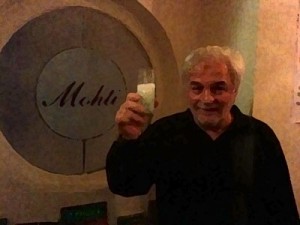 [4]Basking in the khinkali afterglow, we should have called it quits, but no Black Sea feast is complete without at least one plate of fresh hamsi [5] lightly battered in cornmeal and fried. Ours appeared and were devoured in what seemed like an instant, leading to the arrival of a second order.

The pregnant lady admitted to Hüseyin, now sitting at our table, that it was the best hamsi she had ever eaten. He swooned. Pregnant lady excluded, we all had another drink and clinked glasses to the novel concept of a Laz meyhane and to the success of one of Beyoğlu’s newest meyhane dons, Hüseyin Bey.