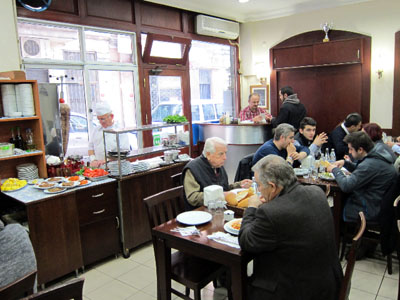 [1]
Turkish politics make for a great lunch-counter conversation. These days, one of the hot topics is a perceived axis shift, as if Ankara, feeling burned by the West, has turned the gaze of the Republic eastward, as easily as a dönerci reverses the rotation of his spit. But down in Karaköy, at NATO Lokantası, an esnaf lokantası [2] named in honor of Turkey’s entry into the Western Bloc some six decades ago, the tenor of the debate is still decidedly Cold War-era. “One lady comes up to pay, says to me, ‘If I knew this place was called NATO, I wouldn’t have eaten here,’ and walks out. Clearly a Communist,” said manager Mevlüt Bey from his perch at the cash register.

But she must have been an exception. On one recent visit to NATO Lokantası, we were pleased to find the place in high spirits. The wood-paneled dining room was filled to capacity with men in ties, tables overflowing with plates, spent hand wipes, crusts of bread and panicked waiters trying to manage all of the consumption – a glutinous celebration of freedom’s victory.

You can’t help but join in on the party, because everything served at NATO is simply delicious. Like most esnaf lokantaları (tradesmen’s restaurants), the menu is composed of daily specials such as sautéed seasonal vegetables, a couple of soups and plenty of meat dishes. It’s always best to make your way to the steam table in the back and see what looks good.

We started our meal with a hearty yogurt-based noodle soup called Erzincan çorbası, followed by the old reliable hamsili pilav, a savory baked rice cake topped with anchovy filets, as a bridge to the main course. Undecided between hünkar beğendi – tender roasted chunks of lamb over a creamy purée of eggplant – and a plate of döner, we ordered a half portion of both (just say, “az”).

With such a variety of main courses, it might seem like a waste to order döner, but a good esnaf lokantası usually serves a high-quality döner [3] in thin slices over rice. NATO’s version was everything döner should be: not too greasy yet fatty enough to keep the meat moist and flavorful. This is not the “donner kebab” of drunken nights in Dublin. The hünkar beğendi was perfectly fine but, truth be told, the one at Karaköy Lokantası [4], just a few blocks away, is much better.

Two teas and a rice pudding later, we surveyed our table and those around us. Customs agents, small businessmen, office workers from Bankalar Caddesi – everyone looked sated and happy, as if they’d just closed a big deal. Say what you will about the NATO (the organization) – that’s a discussion for another lunch – but most everyone agrees that NATO (the lokanta) is just as relevant today as it was when it first opened in 1952.