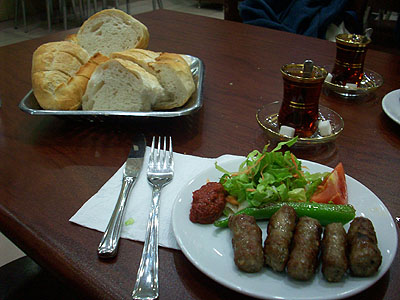 [1]
Editor’s note: This week, Istanbul Eats hops on the bus and heads west to sample the Thrace region’s most famous köfte in its native environment. Guest writers Sherri Cohen and Alex Hallowell, Fulbright English Teaching Assistants at Namık Kemal University in Tekirdağ, have run the gut-busting gauntlet to bring you their top choices for Tekirdağ köftesi, the meatballs that are their namesake town’s claim to fame.

Although Tekirdağ’s city limits start at the standard blue sign at the edge of town, countless highway-side restaurants and truck stops advertising “meşhur Tekirdağ köftesi” fool the novice traveler into thinking she’s entered the small city of 130,000 long before that. The lure of the spicy meatball draws visitors far and wide to this hilly seaside town (which is equally famous for its rakı) about two hours west of Istanbul. Since most home cooks rarely undertake the mixing and spicing process required to make this kind of köfte, it is a dish best eaten out. The more motivated can buy premixed beef and lamb at a local kasap (butcher) for home grilling, but with multiple köfte shacks beckoning on every street, there’s no need to. Each köfteci offers the same lineup (beef meatballs, sometimes mixed with lamb), piyaz (white bean and vegetable salad dressed in oil), çorba (usually lentil soup) and ayran (salty yogurt drink), but too often you’ll end up with a mushy, greasy meatball in a ketchup-y sauce. We’ve been leisurely expanding our waistlines for four months in pursuit of the perfect meatball; here are our top choices.

Köfteci İbrahim is the first quality restaurant you’ll see on your way into town. By night, the towering hilltop building bears more than a passing resemblance to Psycho’s Bates Motel. Luckily, unlike Mother Bates, İbrahim is alive and well and has been grilling köfte in this warm family spot since 1974. Don’t try to distract him from his duties, though; after a quick nod of acknowledgement, he’ll return to flipping the köfte. Start your meal with the thinner-than-average but satisfying mercimek çorbası, but avoid the piyaz, whose colorful fresh carrots and tomatoes hide a sea of white beans drowning in bland salad oil. The köfte offers a satisfying first bite through a well-grilled exterior; roll it well in the thick red pepper sauce for the full flavor experience. The accompanying plain rice cooled the palate after a spicy bite. Service was prompt, though lacking a bit in warmth. Head here during the summer months, when the outdoor patio overlooking the Sea of Marmara makes up for any meal slip-up; our table by the nearly floor-to-ceiling windows made us long for summer breezes.

We stumbled upon Nefis Tat Köfteci on a cold, snowy Thrace night. We hesitated at first – the restaurant has the unappealing vibe of a fast-food joint, with garish lighting and soda-combo meal deal photos above the dessert case – but we were frozen and they were the first köfte spot with hot soup. The mercimek çorbası thawed out our faces with its thick, stick-to-your-ribs puréed lentils, and the piyaz didn’t disappoint. We slowly began to forget the awful weather as a cadre of waiters, with few guests to serve on a Monday night, hovered over our table. We were split on the köfte analysis, though, with one of us rating them only slightly above average and the other raving over the expert grilling and spicy tomato-red pepper sauce. Either way, Nefis Tat was a pleasant respite from the great outdoors, and it’s been serving hungry Tekirdağlıs since 1961. Its central location across from Tekirdağ’s city hall and near the main town square add to its curb appeal; visit on a sunny day and see if the meal holds the same magic for you.

Head further into the city center and you’ll likely pass right by Tadım Tavuk Döner ve Köfte Salonu. The spinning chicken döner, trays of cooling lunch specials in the window and unassuming storefront do little to differentiate it from other cramped eateries and lokantas on the street. But there’s no better place in town to people-watch, and owner Ali will make you feel like an instant member of the lunch crew. He’s been grilling his fresh (never frozen) köfte for 35 years and over that period Tadim’s become a place for city regulars, where everybody knows your name and the butcher shakes your hand after he delivers the midday meat. The young waiter (shouldn’t a 12-year-old be in school?) promptly appeared with the mercimek çorbası, whose wan color and think texture were disappointing. While our suspicions were raised when the piyaz was magically delivered from next door, the lettuce, carrots and beans were dressed with the fruitiest, lightest olive oil we’ve tasted yet. Ali’s köfte was softer than the norm, and presentation wasn’t his strong point; a half-portion came accompanied only by some salad-from-a-bag. But the leaner, less greasy köfte, when rolled around in the sweet-tasting hot-chili sauce, was perfect when matched with restaurant’s full-bodied homemade ayran, and with pleasant conversation with our neighbors, we kept hoping our lunch break would never end.

Ask Tekirdağ locals for a köfte recommendation and most will unhesitatingly answer, “Özcanlar.” With three restaurants, a factory and a butcher shop within Tekirdağ alone, it’s easy to pass its good reputation off to ubiquity. Yet we agree: Özcanlar reigns supreme. Bypass the waterfront location and its big-box, overlit impersonal atmosphere for an upstairs table at the cozy city center location. While the mercimek çorbası is better than average, Özcanlar’s piyaz is the real winner: crispy carrots and juicy tomatoes mixed in equal measure with well-marinated, firm white beans; a slice of hard-boiled egg is an unlikely but welcome garnish. Save room for the full portion of köfte, though. Özcanlar’s meatballs are so expertly spiced that only a quick dab in the brilliant, rich red pepper sauce is necessary. But what really makes this location special is the service: from the attentive waiters to the jovial, booming cashier who talked our ear off, we immediately felt like part of the Özcanlar family. It’s the first restaurant we ate at in town and the one we bring our friends and guests to for Tekirdağ köftesi par excellence. Skip the desserts, though, and head to nearby Sar Patisserie for the town’s most tempting sweets, including Tekirdağ’s famous fluorescent yellow peynir helvası. They’ll have to roll you back to Istanbul afterwards, but it’ll be worth it.