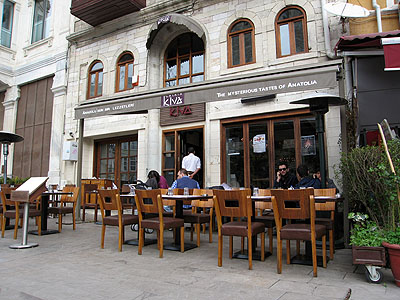 [1]
Imitation may be the sincerest form of flattery, but when Galata’s Kiva Han first opened its doors a few years ago it felt like the restaurant was taking things a bit too far. The inspiration for the slightly upscale spot, located a stone’s throw from the Galata Tower, was obviously the Asian Side’s more down-to-earth Çiya, with a similar menu featuring unusual dishes with hard-to-pronounce names from Turkey’s Anatolian heartland and the Southeast region. But did Kiva need to go so far as to poach one of Çiya’s waiters and the chef with the luxuriant, jet-black mustache who had up until then been an iconic presence behind the counter at Çiya?

Despite this bit of culinary espionage, our initial impressions were not positive. The food served at the restaurant usually failed to pack the flavorful punch that similar dishes had at its competition across the Bosphorus. While meals at Çiya almost always left us marveling at the new flavor sensations we were experiencing, something about the food at Kiva Han left us cold. There was no soul there, something that could not be fixed simply by stealing away Çiya’s staff.

What the restaurant did have – and still does – is a great location, especially when the weather is nice and its outdoor tables offer diners a chance to eat in the shadow of the Galata Tower. Unlike Çiya, Kiva Han serves wine, which makes it an interesting option for those looking for a bit more of a night out.

In the name of fairness, we recently returned to Kiva for lunch to give the place another try. Lucking out with the weather, we were able to get one of the restaurant’s outdoor tables and then made our way inside to choose some food from among Kiva’s numerous prepared dishes, all of which looked very appealing. We ended up an assortment of items based on recipes with intriguing and far-flung regional roots: kofte from the east’s Elazig, sarma (stuffed vine leaves) in a tangy plum sauce from central Anatolia’s Tokat, a moussaka-like ground meat and smoky eggplant dish from southern Turkey’s Antakya, and several other dishes with unknown origins.

Things had clearly improved since the early days, with the Antakyan mousakka and the plum-flavored sarma standing out in particular. While nothing totally wowed us, there was certainly more soul in Kiva Han’s cooking these days. From merely being an imposter, it appears that Kiva Han has worked its way up, although it still has some more work to do before becoming a true contender. The restaurant is a perfectly good choice for a leisurely and enjoyable meal that doesn’t require taking a ferry to the Asian side. But for a truly knockout culinary experience, we still recommend heading over to Çiya.