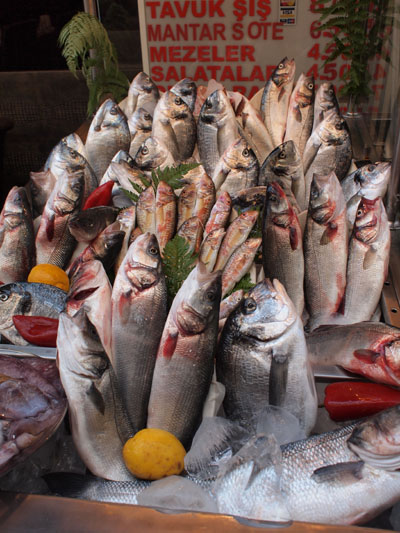 [1]
The Wall Street Journal has come out with a sobering article that takes a look at the dwindling fish supply in the Bosphorus, where tuna and large mackerel used to make annual runs but have not been seen in the heavily-fished strait since the 1960’s. This year, it appears that even lufer, that staple of Istanbul’s wintertime dining scene, has not made an appearance in the Bosphorus’s waters.

It would appear that overfishing is to blame for the lufer’s disappearance, but — as the WSJ article tells us — Mustafa Kokos, an Istanbul commercial fisherman and a fisheries advisor to Turkish Prime Minister Recep Tayyip Erdogan, is having none of that. In fact, he says it’s time to crank up Turkey’s fishing activity:

“There’s enough fish in Turkey to feed the world,” says Mr. Kokos, who is also fisheries adviser to Prime Minister Recep Tayyip Erdogan. He says he recently put a proposal to Mr. Erdogan to develop Turkey’s annual fish exports to €5 billion in five years from €180 million today, in part by keeping the processing in Turkey. “We should put three hamsi (Black Sea anchovies) in a can, squirt some sauce on it and sell it to the Americans.”