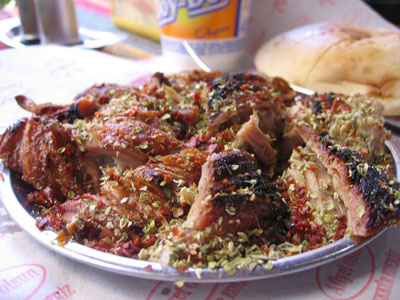 Although this review is of Sirkeci’s Kral Kokoreç, it is first and foremost a tribute to Vahap Usta, Turkey’s original king of kokoreç.

The second half of the 1980s: I remember me and my mom heading to the street of the “Big Post Office [3]” in Sirkeci during her lunch break. In my mind, the street of the Büyük Postane is the best place to reflect on the spirit and history of the Sirkeci neighborhood. On this street, I would always see a big crowd standing in front of a small shop on a corner opposite the Ziraat Bank (which still exists in the same place). I can remember that inside that shop there was a guy suited up and wearing a bowtie working in front of a giant kokoreç cart, passing one half sandwich of kokoreç (grilled lamb intestines) after another to the people waiting in line.

This guy was the legendary Vahap Usta [4], who single-handedly made kokoreç famous in Turkey. He was a weird man, though. By adding his remarkable sense of style to kokoreç, he developed a new way to market the stuff and very quickly became a culinary legend (and a rich one, at that, at one point driving a Mercedes to get to his cart). But in due course he disappeared, along with his legend and story, never to regain his fame. Over the years, I saw him hawking kokoreç in varied places: respectively, in Maltepe on the Asian side, the Çiçek Pasajı and Büyükparmakkapı Sokak in Beyoğlu and back on the Asian side in the Kızıltoprak area. For some reason, he would close all these new initiatives after only a few months and move on to the next one.

Today, while Vahap Usta is still around, he is no longer standing by his cart and grilling the kokoreç. Rather, in a desperate move to regain his fame, he is selling to others the right to use his name. I am so sorry for Vahap Usta. I would really like to learn and write his true story and find out what lies beneath his tales.

For now, what remains of Vahap’s original kokoreç vision is Kral Kokoreç (“Kral” means king in Turkish), which is run by Hasan Usta, who hails from the eastern Turkish city of Ardahan, and has been operating since 1992 in Vahap Usta’s old place on the street of the Büyük Postane.

While my subconscious always compares anyone else’s kokoreç-making skills with Vahap Usta’s, I see Hasan Usta in the same league as the king. After dozens of trips to this place, I can say that Hasan Usta’s kokoreç is excellent. They are not simply buying the lamb intestines used in their kokoreç, but are actually raising the lambs, too, which gives them full control over the whole process. Hasan Usta has been involved in kokoreç business since the 1980s, first starting with a small kokoreç cart in Şişli. Today he is helped out by his two veteran assistants, Burhan and Adnan, who have also been in this business for many years and, like Hasan Usta, have clearly fallen in love with kokoreç.

During our talk, Hasan mentioned that a lot of things have changed from those early days, but he became serious when the subject turned to Vahap Usta. “Kill the hero but pay him his due,” he said, using a Turkish idiom. “He was the one who introduced kokoreç to Turkey and made this dish loved by the people. Unfortunately, things didn’t go as planned for him and after that he could never rise again.”

Hasan Usta showed us the real ritual of eating kokoreç. He advised us to stay away from tomato and green pepper, which are often served alongside kokoreç, and to eat it unadorned (except for a sprinkling of oregano and red pepper flakes). “You should eat good kokoreç as it is, in order to understand its taste better,” he said. We listened him and ordered a full portion of ungarnished sliced kokoreç. Of course you can also eat it served inside a fresh pita or a crusty hunk of bread.

Judging by the large number of tourists around, I can say that there are a lot of world citizens who tried kokoreç at Hasan Usta’s for the first time and liked it very much. Over the years, I have heard many discussions about the hygiene of this dish and the possibility that European Union rules could lead to its eventual prohibition. But folks, during my last visit to Florence, Italy, I saw another culture that ate intestines and tripe by the cartload, so I am closing my ears to these nonsensical discussions.