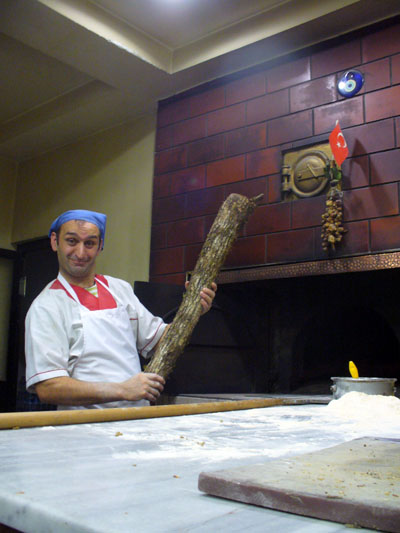 [1]
(Editor’s Note: As 2010 heads to an end, we are looking back at our “Best Bites” of the year and are asking our readers to do the same and share their best Istanbul eating moments with us. This submission comes from a Mike and Ilene, a couple from New York that had a memorable encounter with a very animated pide maker at Pera Sisore [2], a Black Sea restaurant in the Asmalimescit neighborhood.)

Thanks to Istanbul Eats and the adventurous eating you encouraged, we had many memorable meals during our escape from New York in early October. The most surreal (in a good way) was our final dinner in Istanbul at Pera Sisore, the Black Sea spot you recommended in Beyoglu. We were seated in the back, next to the wood burning oven, and soon observed the zany ways of the pide master. We watched him joyfully pitch every variety of wood into the oven — from log to broken crate — and then return to kneading the dough, smiling at us and making funny faces while he worked. When he saw we had a camera, he implored us to take a photo of him posing with a hunk of wood, ready to thrust it into the oven. After we finished the magnificient pide he had crafted for us (and obligingly served with extra butter), he came over and excitedly spoke to us in Turkish, with a few English words mixed in. Unfortunately, since we are still expanding our 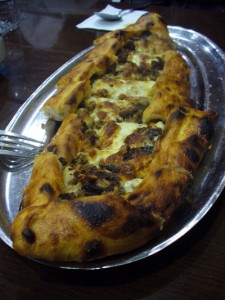 [3]Turkish vocabulary beyond “merhaba,” “teşekkür,” and “çorba,” we’ll never know exactly what he meant to tell us. However, he seemed to be saying that he was an actor, or at least an extra, in Western (cowboy) films. He showed us a video clip on his phone and insisted that an actor in a ten-gallon hat on a dusty mesa was in fact him. We didn’t see much of a resemblance, but were willing to take his word for it until the table of Turks next to us roared with laughter. He asked to see our shot of him posing with the log, and then asked that we send it to him, so that he could hang it on the restaurant’s wall — like a celebrity’s glossy photo, we supposed. We’re not sure if that was a flight of fancy, or what he actually said, but we’re sending it on to you so he can at least have a moment of fame on the internet.