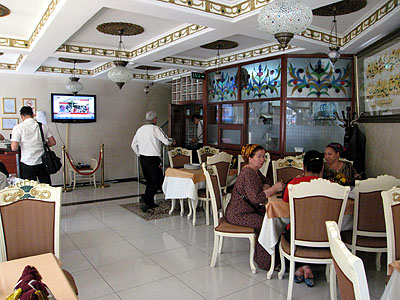 [1]
(Editor’s Note: Since it turns out that “DTVAE [2],” our favorite Uighur restaurant in town, is closed while the Ottoman-era building it is in is being restored, we thought it might be worthwhile to again run this review of another excellent Uighur spot — which happens to be right around the corner from the closed one.)

It was a dark and stormy night. We found ourselves standing cold and shivering, stomachs growling, in the lobby of a shady hotel, our dining plans once again thwarted by the capricious nature of Istanbul’s restaurateurs. What was supposed to be a restaurant inside the hotel serving southeastern Turkish cuisine had now been turned into a forlorn spot devoid of customers and with an unappealing menu written in Russian.

What to do? We stepped outside and took a look around and saw few promising options in this part of town, known as Laleli, a wholesale clothing district dominated by shops selling cut-rate leather and fur coats and by cheapo kebab joints. That’s when we remembered a recent tip we had been given about a new “Uzbek” restaurant in the area. After making a few inquiries with some locals, we found ourselves inside the gleaming Mihman, a Central Asian restaurant that opened its doors only a few months ago.

Things looked promising right off the bat. The vaguely gaudy décor and the frilly tea cozies on the tables telegraphed Central Asian authenticity. This was quickly reinforced by the pot of steaming green tea that was brought to our table, to be drunk – Central Asian style – out of small bowls. The encyclopedic menu, meanwhile, promised a long list of tempting dishes, both familiar classics and intriguing obscure ones, that will make a return visit a must.

Perhaps overcome with hunger and a sense of nostalgia for previous meals we’ve had in the land of the ‘stans, we went ahead and ordered several things. Perhaps we were again overcome by hunger and nostalgia, but we can report that everything we ordered at Mihman – run by an Uzbek who hails from the Uighur city of Kashgar in western China – was a winner. The extremely fresh puffy little round loaves of Uzbek naan seemed as if they had been flown in from Tashkent that morning. The plump Uighur-style manti were superb. Çuçure, a soulful reddish broth that had tiny dumplings floating in it, hit the spot on a rainy night. The very tasty Kashgar kebab, grilled chunks of lamb flavored with an earthy-tasting mix of spices, took us back in time to a long-ago visit to the dish’s namesake city.

We ended the meal by renewing our plov affair with plov, the Uzbek rice dish that conquered Central Asia. Like any good plov, Mihman’s hid layers of complexity beneath a deceptively humble façade, with fragrant basmati rice, slivers of sweet carrot cooked until they are almost candied, assertive cumin seeds and chunks of flavorful meat all working together to create one of the more appealing comfort food dishes we know of.

We take the opening of this enticing plov shack (which is located near an excellent Uighur restaurant [2]) as a very positive sign for Istanbul’s dining scene, which until recently had been devoid of good, authentic places serving food from other parts of the wider region surrounding Turkey, particularly east of the border. Considering how many Uzbeks, Uighurs, Iranians and others call Istanbul home, we’ve always found it a bit strange that it’s very hard to find any restaurants serving food that caters to them.

Much has been made recently about Turkey’s possible drift eastwards. We don’t like to comment on political matters here, but when it comes to culinary ones, we say: drift, baby, drift.