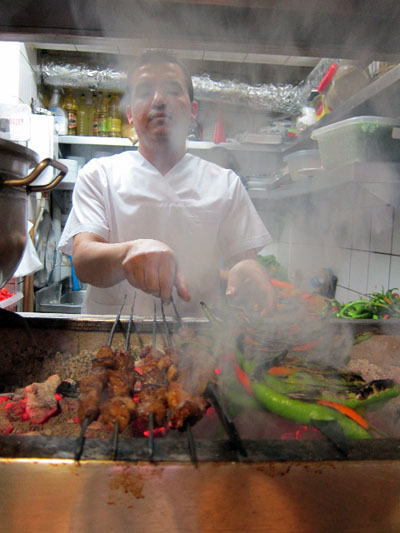 [1]
With its walls lined with pickle jars, Fanta cans, six packs of yogurt drink and little grenade-shaped bottles of şalgam, or turnip juice, Melekler looks like nothing more than a bodega with a humble little lunch counter in the back. But a quick tour of the facilities convinced us that packaged goods are only a sideline and that this is a serious kebab setup – complete with a “sous-chef.” All appearances aside, these guys are deep into the durum business.

We arrived at Melekler on a tip from a taxi driver from the southern Turkish city of Adana, where kebab talk can get esoteric. Because Istanbul taxi drivers always seem to be from somewhere else in Turkey and tend to be deeply suspicious of the restaurant business (“rip-off,” “filthy,” and “not tasty” are among the more benign descriptions we’ve heard about various places around town), we find them to be great sources for hard-to-find regional specialties. We’ve whittled away countless hours stuck in traffic on the bridge or inching by a stadium on game night arguing the merits of köfte or learning about the rare and great testi kebabi of Yozgat and, most importantly, where to get them in Istanbul. Of all the taxi drivers we’ve surveyed, few offered up a tip as emphatically as this particular driver from Adana telling us that we must have a durum at Melekler. So, one week later, we took a seat among all of that stock and ordered a durum, ala Adana, of course.

Mehmet usta, from his post at the grill, said there’s not much to it, “Durum should be good and it should be cheap and I’m not skimping on the materials here.” His statement takes for granted a bachelors degree in butchery (the meat for a true kebab is cut with a special knife called a zirh, see demonstration here [2]) a great instinct for balancing of flavor and preternatural grill skills. Mehmet worked a group of long skewers over an intense white-coaled fire with ease until it was ready and swiped the meat onto a wide flat piece of lavaş. He added onions, sumac, and plenty of parsley before rolling and giving the finished product a quick, valedictory roasting over the coals. The result was as good as promised.
When dealing with top-tier durum it can be hard to pinpoint what it is that makes one durum so much better than another. That’s a discussion for folks from Adana. But we do know it when finely chopped fatty lamb, fresh onions and some simple spices create smoky harmony within a fresh flatbread as it did one recent afternoon at Melekler. As Mehmet usta said, it should be cheap and good, that’s it – a logic neither we nor most Istanbul taxi drivers would disagree with.