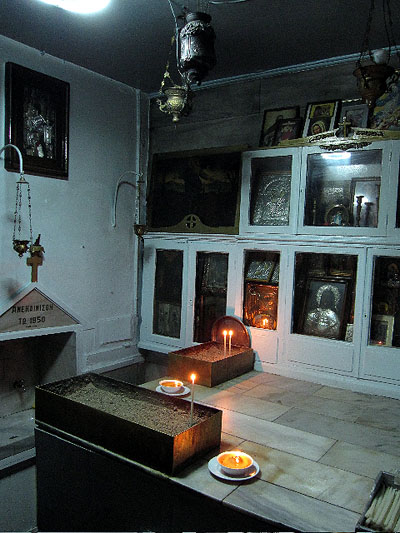 (Editor’s Note: We are rerunning this review in honor of St. Cathryn, to whom the shrine in the basement of this restaurant is dedicated and whose name day takes place tomorrow (Sept. 25). According to local legend, some fishermen at a certain point came across a natural spring in the rocks near the shore of the Asian side’s Moda neighborhood and it was decided that it was a sacred spring (or ayazma). A little more digging around the area revealed the foundations of an old ruined church and then an icon of St. Cathryn, which led to the  ayazma being named for this Saint. The ayazma was renovated a bit over the years and Koco, which was located beside it, built their restaurant over it and became the shrine’s keeper.)

Reviewers are often tempted into using metaphors that portray the restaurant as a sacred place — the sushi temple, a t-bone pilgrimage, chili-cheese fry heaven. But in Istanbul’s Moda district on the Asian shore, we’ve found a praiseworthy fish restaurant that could justifiably be described as a shrine – literally.  For more than 50 years, a local Greek family has been serving saints and sinners alike at Koco, a rambling seaside fish house situated atop an ayazma, or sacred spring. There’s meze and fresh grilled fish with raki upstairs, candles and a shot of holy water downstairs.

Judging by the size of the dining room, Koco is preferred by very large groups. One recent weeknight, though, there were just enough customers to fill in the tables lined along the windows. The view of the old Moda ferry dock and the Marmara Sea from the window side of the room is excellent but leaves you leagues from the coat check where the staff hangs on a slow night. The time it took the waiter to make it across the vast restaurant with the meze tray was almost comical.

All worries were washed away once he made it across the room, though. Balancing the heaping wooden tray on the back of a vacant chair, he sorted through the options, “We’ve got eggplant puree charcoaled, very nice brains, you like brains? Lovely beets, beets? Octopus salad, very tender, take the octopus salad.”

We couldn’t resist, and tender it was, sitting in a drizzle of olive oil alongside chopped pickles. If the quality of an octopus is decided by its tenderness, smoke is the factor the patlican salatasi, or eggplant puree. A good dish of this lovely spread should not only smell and taste of the grill but give the impression that its been down there socializing with the charcoal for days, as Koco’s did. Cibes, a large leafy Brussels sprout-like vegetable was the meze trey wild card. Cool, soft and pleasantly coated in garlicky olive oil, this was unlike any Brussels sprouts we’ve had.

But the real pleasure of the meal came in the form of a perfectly grilled lufer, or blue fish. Our fish was so moist and tasty it almost seemed as if it had been doused in butter. But no, it was just a very fresh fish in the hands of a grill man with a lot of practice and the power of prayer behind him. Clearly, whatever blessings were being recited down in the basement must have passed through the grill on their way up to the heavens.

A full spread at Koco with local wine or raki costs about $40 per person. A $2 donation for a candle downstairs in the shrine is optional.