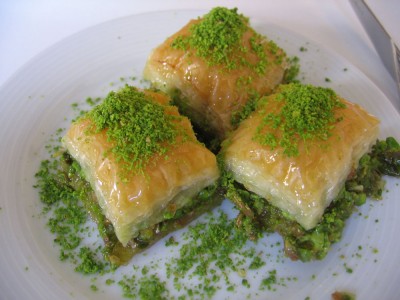 [1]
Editor’s note: In Salih Seçkin Sevinç, creator of the fantastic Turkish-language food blog Harbi Yiyorum [2] (roughly translated as “Eating, For Real” in English), we’ve found a kindred spirit and a source for great eating tips. We’ve asked Salih to share with our readers some of his culinary wisdom this week. This is his third post about the mind-blowing food scene in Southeast Turkey’s Gaziantep.

Our plane arrived at 9:30 in the morning at Gaziantep Airport and one hour later we were already at kebab and baklava emporium İmam Çağdaş – the first place in the city that comes to mind for eating – for breakfast.

İmam Çağdaş was founded in 1887. Today, it is run by the grandson of İmam Dede: Burhan Çağdaş. They also send orders “outside,” by which I mean overseas. One of their famous clients is the Turkish president, Abdullah Gül.

When we arrived, the place was empty. We settled at a table next to the window. The waiter approached. We said, “Selamün aleyküm. We are coming from Istanbul. Writing articles on eating and drinking. We will eat and drink. Also take some pictures. Did we arrive a little bit early, today?” “What do you think?” he replied, sarcastically.

Despite the early hour, we ordered an eggplant kebab and an ayran to go along with it. Following the waiter’s suggestion, we also ordered an Antep-style lahmacun to start off. Of course, we were advised about the restaurant’s baklava before coming here, so we ordered that as a dessert.

In Antep, lahmacun is prepared with minced garlic that’s sprinkled on top. Mashed grilled eggplant is served on the side to spread on it. You apply the mashed eggplant on lahmacun and you eat it that way. We never tried lahmacun like that before, but it tasted weirdly nice. Actually, that lahmacun was the best lahmacun we’ve ever tried. The dough was not too crispy and not too soft, the minced meat that topped it delicious. After we squirted some lemon on this beautiful lahmacun, we were informed that in Antep a lahmacun eaten with eggplant and lemon is called “söğürtme.” We should note that we tried lahmacun in several different places during our visit, but folks, lahmacun should be eaten at İmam Çağdaş.

But now it’s time to sing the praises of the baklava that we ate at İmam Çağdaş.

There are so many baklava makers in Gaziantep, but we never tasted anything as good as what we ate at İmam Çağdaş. It’s a totally different experience.

I asked the owner how to eat his baklava? He said, “Leave the fork and the knife and grab the baklava between your two fingers. Turn it upside-down. Push it towards the roof of your mouth and now bite.” I did as he said. Oh, God! Wish I never had bitten that thing. The miraculous crackling sound that was made as I bit down on all those thin, flaky layers went straight to my brain. My approach to baklava will never be the same again.

Yes, that one bite completely changed me till death.

(The original post in Turkish can be found here [4]. Photo by Salih Seçkin Sevinç.)