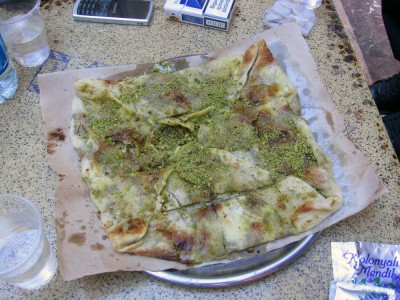 [1]
Editor’s note: In Salih Seçkin Sevinç, creator of the fantastic Turkish-language food blog Harbi Yiyorum [2] (loosely translated as “Eating, For Real”) we’ve found a kindred spirit and a source for great eating tips. We’ve asked Salih to share with our readers some of his culinary wisdom this week. This is his fourth and final post about the mind-blowing food scene in Southeast Turkey’s Gaziantep.

When we were in Antep we didn’t just eat kebab, of course. We asked for the best katmer around. Ciğerci Asef advised us on how to find the lord of the masters of katmer, a breakfast pastry made out of sheets of phyllo dough wrapped around kaymak and chopped pistachios (pictured above). It has been said that the people of Antep eat liver kebab and katmer at breakfast, and then they don’t put another thing into their mouths till evening? Is that true? Absolutely!

Locals describe the kaymak that is used inside katmer as “kaymağın, kaymağı” – literally the “creme de la creme.” The pistachio and kaymak inside the warm layers of the katmer generates an incomparable flavor balance in your mouth and stomach and, yes, you never want to eat anything else until evening.

We asked what they are up to after 11:00. Katmerci Zekeriya Usta is preparing orders from other cities and countries, they told us. Look at that! They are sending these things to “New Zealand”! Wow. “Don’t they get spoiled during transit?” we asked. “Nothing happens,” they answered. We never tried an outside order but anyone who wants to can try, as you will find the address and telephone number at the end of this article.

While we were eating our katmer we encountered a group of travelers from Izmir who were also on the hunt for Gaziantep’s culinary treasures. While we eating our katmer, they said to us, “Do not fill yourselves with katmer, guys. We will take you to the place of Altıntel Erdal Usta, who makes the world’s most beautiful burma kadayıf.” We obeyed, of course!

Our stomachs were saying, “No!” But our minds made us say, “Eyvallah!” We soon found ourselves looking at the display of burma kadayıf – a dessert made out of golden strands of shredded wheat wrapped around chopped pistachios – inside the store of Erdal Usta. We ordered one portion of the dessert and, perhaps because of having so many sweet things to start off the day, we started seeing hallucinations and were soon shouting out robotically, “burma kadayıf, burma kadayıf, burma kadayıf.”

I have to admit something: It was the best burma kadayıf I ever ate in my life.