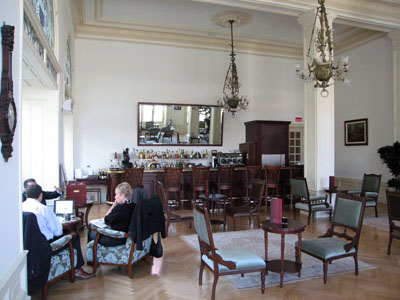 [1]
The closing of the landmark Pera Palas Hotel for renovations over the last few years meant we no longer had access to one of our favorite watering holes in town, the hotel’s classy yet cozy bar. The 19th-century Pera Palas, of course, was the elegant place where the passengers of the old Orient Express train would stay once they arrived in Istanbul and, among the hotel’s guests were Agatha Christie and Mustafa Kemal Ataturk.

We were looking forward to the hotel’s reopening, especially since one of the new management’s people told us the bar remained exactly “as it was.” But two recent visits to the bar have presented a mystery worthy of Agatha Christie herself – namely, where did the old Pera Palas bar disappear to? The hotel still has a bar in the same location as the old one, but that’s about where the similarities end.
The old bar oozed atmosphere, easily transporting you with one sip of your drink back into the days of the Orient Express and cosmopolitan Istanbul. It was the perfect place to imagine yourself in the midst of intrigue and assignations.

Meanwhile, the Ottoman-era bric-a-brac that were hung on the walls – an old rifle, a pair of elk horns – hovered on the edge of kitsch, but also gave the place an inviting clubby feel.

The new bar does away with much of that. The place now has a bright, somewhat sterile feeling, with little on the walls. There is actually very little that separates in look and feeling the bar from the patisserie at the other end of the hotel (except that one serves drinks and the other cakes). And, despite the promise of leaving things as they were, we certainly don’t remember the old place having a wood-paneled dumbwaiter with a garish LED display behind the bar.

Most disturbingly, the two times that we’ve been there we found ourselves shadowed by one of the hotel’s staff, who eyed us suspiciously as we made our way to the bar. The hotel’s new management clearly misses the point that the promise behind the old bar at the Pera Palas was that it was a place to go have a drink when you didn’t want to be watched. So much for that.

Fortunately, those seeking a sip of the way things were have an option, which happens to be just up the street from the Pera Palas. While the Pera Palas has gone upscale, the nearby Buyuk Londra Hotel – which was built the same year as its more famous neighbor – remains untouched and as quirky as ever. Like with the Pera Palas of old, stepping into the Buyuk Londra’s lobby is like taking a step back in time. 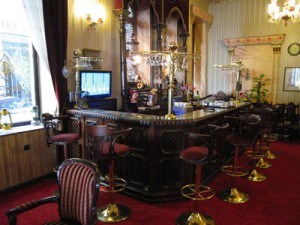 [2]The hotel’s small lobby bar, meanwhile, remains as charming and atmospheric as ever. And on a recent visit, the only creature that bothered us was one of the hotel’s caged parrots. We hope our secrets are safe with him.