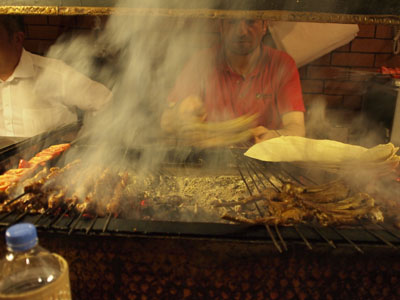 [1]
(Editor’s Note: Although the culinary roots of skewered meat hail further to the south and east, Istanbul has very much become a kebab town. After the jump is a highly subjective list of five of our favorite places in town for kebab.)

Zübeyir:
The standard grill items here are all outstanding. Their Adana kebab – spicy minced lamb – has just the right combination of meat, fat and red pepper. Chicken wings (kanat) and lamb chops (pirzola) are also superbly grilled. Zübeyir also serves up some cuts of meat not found at most kebab joints, such as the tasty tarak (lamb spare ribs) and, for the more adventurous, the koç yumurtası, ram’s testicles (which, we must admit, we have yet to try).

It’s not easy to standout in a city filled with kebab restaurants. Zübeyir does it effortlessly.
(read more [2])

Dürümzade:
At Dürümzade – a grill joint positioned right on the fringe of the rowdy, bar-lined

If a sandwich is only as good as its bread, then any dürüm discussion is all about the lavaş, the Turkish tortilla that’s used to make it. Dürümzade’s thin ovular lavaş, rubbed with a mix of red pepper and spices, is far from the stiff, uniform discs found in many other dürüm joints. Like a good thin pizza crust, Durumzade’s lavaş is filled with textural variations, bubbles, crispy edges and moist chewy pockets. Stacked and hidden away, it incubates in a drawer below the charcoal grill.
(read more [4])

Kebapçı Enver Usta:
We usually avoid cramped basement spaces that have open fires and only one, narrow exit. But we make an exception for Kebapçı Enver Usta, a subterranean kebab joint that hits the spot when we’re looking for a simple and satisfying lunch.
(read more [5])

[6]Gaziantep Burç Ocakbaşı:
A friend recently directed us to this small Grand Bazaar eatery and we are now forever in her debt. Located on a narrow side street off one of the bazaar’s busier thoroughfares, this unassuming grillhouse serves up very tasty Gaziantep-style food (Gaziantep, a city in Turkey’s southeast, is considered one of the country’s culinary capitals). Our Ali Nazik, tender morsels of marinated beef sitting on a bed of a
garlicky yogurt-eggplant puree, was perfectly made. The delicious shepherd’s salad served on the side, topped with chopped walnuts and zingy pomegranate molasses, was impeccably fresh. We were even more excited about the restaurant’s specialty – extremely flavorful dolmas, made out of the shells of dried eggplants and red peppers that are rehydrated and then stuffed with a rice and herb mixture and served with yogurt on the side.
(read more [7])

Şehzade Erzurum Cağ Kebabı:
Istanbul has plenty of kebab joints, but places serving cağ are sadly hard to find. Originating in the eastern Anatolian province of Erzurum, the kebab looks like a

[8]horizontal döner, but tastes otherworldly. If South American cowboys somehow found themselves in Erzurum’s grassy Turkish steppe, they would surely be struck down with déjà vu at the sight of this carnivores’ fantasy, turning slowly over a hardwood fire. The way we see it, cağ is the Turkish equivalent of Argentina’s asado or the Brazilian churrasco, a kebab for serious meat lovers.
(read more [9])