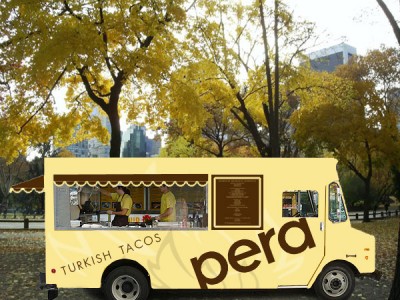 [1]
The closing of the old Manhattan dining institution Tavern on the Green must have marked the end of an era for many New Yorkers. But the entrepreneurial Turks over at Pera Mediterranean Brasserie (from here on “Pera”) in midtown Manhattan saw it as an opportunity for conquest. In its new incarnation, what was Tavern on the Green will host a motley crew of food trucks serving everything from stir-fried noodles to the newest object of our fascination, the very innovative and delicious-sounding “Turkish taco.”

Here at Istanbul Eats, we’ve got little to do with what goes down west of Ataturk airport, but reading the words “Turkish taco truck” in a recent news item from New York captured our interest. We did a little investigation from afar and here is what we found.

As much as we’d like to imagine a nomadic Turkish food truck blazing a trail out of Anatolia and finally setting the parking brake beside Central Park, the story of New York’s first Turkish Taco Truck is a bit less random. Istanbul-born owner of Pera, Burak Karacam, is both a New York finance man and heir to the Turkish kebab empire, Kosebasi. Midtown’s Pera has been serving a sort of Turkish taco for some time now, along with traditional Turkish kebabs. In a shell of warm, soft lavash, the restaurant loads smoked lamb with a sprinkle of white cheese – both a nod to Turkish durum tradition and a thumb in its eye.

The taco truck part of this equation was encouraged by the ethnic-fusion-sold-from-a-truck craze that has swept the United States. Strangely, in New York, a Turkish Taco truck seems quite obvious. And no one appears better equipped than the folks over at Pera.

We just hope the success of Pera’s foray into New York street food will be heard over here on the shores of the Bosphorus, where we are in dire need of a Turkish taco truck.

The Turkish Taco Truck will make its maiden voyage up to the Park October 15th. The truck vendors plan to serve year round in a garden/courtyard area formerly dominated by Tavern on the Green’s famous Crystal Room, which has been torn down.