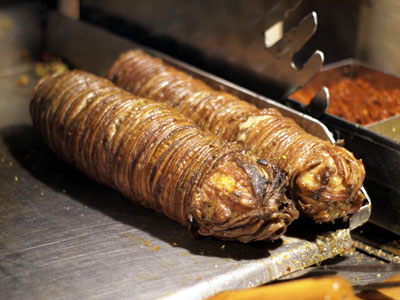 [1]
In Istanbul, offal-eating traditions run deep. In the wee hours, the horde heads out for tripe and trotter soup. Some butcher shops, like exclusive boutiques, sell nothing but organs, hanging them proudly in the glass vitrine like so many Fendi handbags. We’ve written at length about finer points of kelle [2], sheep’s head, and our adoration for liver [3]. But Istanbul’s favorite innard remains kokoreç, or grilled sheep intestines chopped with peppers and tomatoes, and in the streets around the Galata Tower we have identified three great spots to enjoy it.

In Beyoglu, it’s easy to write off kokoreç as an olfactory nuisance. There is nothing too appetizing about a high pile of chopped sheep’s intestines in raw form sitting on the side of the flattop grill at Bambi in Taksim Square. But, like the spit-grilled kokoreç we’ve come to crave, we are “slowly turning” into this street food’s biggest boosters.

Down by Galata Tower, a pushcart’s charcoal grill sizzles and pops below a spit of tightly wrapped intestinal bounty sending a puff of smoke that seems to envelope the entire tower and its observation deck. Tourists visit this area for the panoramic views, but locals are drawn in by the smell of kokoreç. It’s a whiff of grill glory that even lures the staunch anti-kokoreç camp of which we were once hardcore members.

Nazmi usta works the wide plaza at the foot of the Galata Tower everyday from his bright metal cart, slowly roasting a long sheesh of kokoreç throughout the afternoon and evening. A customer walks up and he gets to work, sliding off a portion onto a worn wooden cutting block. Cats gather around begging for a scrap. He chops it up with tomatoes and green peppers kept beside the fire and sets it onto a griddle over the fire while the bread toasts over the coals. A blast of oregano and crushed red peppers and then it is scooped into the shell of a half (yarim) or quarter (ceyrek) loaf of bread.

For the uninitiated among us not knowing exactly what to expect, the first bite of kokoreç summons a wide arching of the brow, “not bad.” The crispy rim of those tightly wound innards offer a smoky, crunchy counterpoint to the softer rich cuts at the center, which seem to melt right into the folds of the bread like sinfully rich butter.

“That’s the uykuluk,” said Ramazan usta of Akdeniz Kokoreç referring to the sweetbreads around which the intestines are wrapped. “Some places just use fat in the middle, but uykuluk is important for real kokoreç. And skills, of course.”

With its cultish following and vocal opposition, kokoreç is probably the most polarizing street food in town – either you eat kokoreç or you do not and you defend your position fiercely.  So we naturally expected it to be a bit more challenging – like a novel by James Joyce. But after taking the plunge and happily sampling many a kokoreç ceyrek around town, we found eating kokoreç to be surprisingly simple – more like a Dan Brown paperback. Having joined the kokoreç eating camp, it is now our joy to proselytize.  Below find the kokoreç trifecta of Galata.