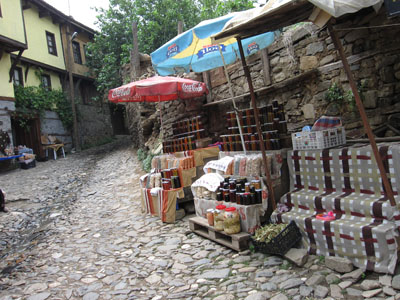 [1]
With all of the hype around Bursa’s claim to fame, the İskender kebab, you’d think Bursans persisted on a diet of thinly sliced döner, pide, tomato sauce and frothy melted butter. But in between the spinning meat-sicles, the very icon of Turkish fast food, the markets of Bursa offer a bounty of traditional syrupy sweets, fresh fruits and berries, farm cheeses and hulking loaves of village bread. The mighty İskender might have conquered Bursa in name, but, thankfully, Bursa’s culinary backstreets, the verdant farming villages that encircle the city, are keeping the region’s larder stocked with a wide array of delicious food. The untold culinary story of Bursa unfolds around the breakfast table in serene, leafy village gardens, before the döner even hits the spit over at Kebapçı İskender.

“On Sundays, we have a staff of 25. People drive in from Istanbul just for breakfast,” said the owner of Mavi Boncuk, a breakfast garden-cum-guesthouse located in the idyllic village of Cumalıkızık near Bursa. The focal point of Mavi Boncuk may be the quaint little stone and timber village houses where guests can stay, but all of the action takes place in the sprawling multi-tiered garden where breakfast is served. On one recent Saturday night, after the staff had all left, we fell into a deep sleep to the soft splat of mulberries falling from the trees in the garden and the anticipation of what would be a major breakfast event.

The next morning, before breakfast, a quick stroll around the narrow stone-paved alleys of the village offered a sneak preview of what our breakfast held in store. Around one corner, a spry old woman in Anatolian camouflage – baggy pants, shirt, headscarf of three different floral prints – beckoned us into the courtyard of her home to show us what she was up to. A wide pan of blackberries au jus was bubbling over a fire of twigs. “I gather the blackberries and raspberries with my husband,” she said, jerking a thumb in her husband’s direction without looking at him. “I make the jams, jar it and sell it. My daughter-in-law lives right upstairs but she does nothing!”

Her husband took us out to the garden to sample ripe blackberries and divine raspberries. As we picked and ate at will, he fielded a telephone call about the availability of river trout. Yes, he could source them, no problem. These villagers are clearly in the business of food.

Just down the way, under a jutting bay window overhang painted pastel blue, a fat lady sat in front of a table filled with bags of tarhana (a dehydrated soup powder of wheat and yogurt), brown eggs, jars of deeply hued chestnut flower honey and bags of erişte, a sort of Anatolian noodle. Following a stream that ran right down the middle of the stony path, we found another old lady with jars of bright red tomato and pepper paste. “It’s spicy, son,” she said as we walked by, “spicy.” Around another corner we found a young lady watching over a table of long spirally loaves that looked like a giant croissant, alongside hearty, dark wheels of bread dusted in flour.

Then the narrow street opened all at once onto a wide plaza where much of the same foodstuff was for sale in great abundance. At the center of the plaza sat a beautiful big red tractor flanked by two boisterous old farmers selling blackberries and raspberries at sinfully low prices. It seemed everyone in this quaint little village was selling something delicious and they all looked happy and well fed. Wandering around the village, tasting some of this and buying a jar of that, we felt like a certain character in the children’s book Charlotte’s Web delighting in a veritable smorgasbord.

By the time we returned to the Mavi Boncuk – our appetite peaked by the morning stroll – breakfast was slipping into high gear. As promised, there were dozens of ladies in colorful headscarves darting around – one with toasted bread, another concerned only with the kaymak [2], two who worked the gözleme [3] station. Tea, though, was the business of a group of nimble young men in uniform, served in big brass samovars requiring yet another staffer, charged with doling out hot coals from a barbeque pit.

We found a table under a tree near two dogs tethered to a fence post. As they bounced around at the end of their chains, another dog slinked around the breakfast area freely but the waiter told us not to worry: “He’s blind.” And then breakfast was served.

In previous travels in Turkey, we’ve happened into idyllic farming villages like this one only to find the breakfast table set with the same packaged foods we find in the supermarkets of Istanbul. In our experience, an entirely farm-to-table meal can be surprisingly hard to find. However, our breakfast in Cumalıkızık calls for reconsideration. Whether the folks in Cumalıkızık got the slow food memo or they are just upholding an entirely logical rural supply chain, we will never know. We will, however, be looking out for more culinary destinations like this one.

Now, if we close our eyes and try to conjure the quintessential Bursa flavor, spinning meat-sicles trimmed by men in white jackets no longer come to mind. It’s the warm, sweet, runny scoop of blackberry jam served up by rough, stained fingers in a smoky courtyard that remains the strongest impression – one that will surely lure us back to Cumalıkızık every season.

Note: Cumalıkızık is roughly half an hour by car from the center of Bursa. Reservations for Sunday brunch are strongly recommended. One night at Mavi Boncuk including breakfast for one person is 80 TL.