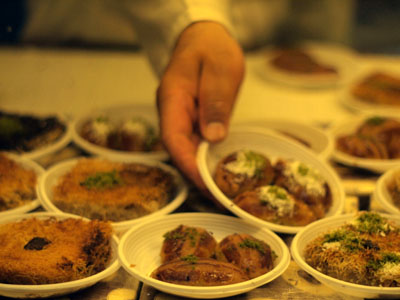 [1]
A disturbing article in today’s Hurriyet Daily News reports on efforts by the Beyoglu and Fatih municipalities to crack down on “unlicensed” street food vendors. As increasingly hassled vendors tell HDN’s reporter, licenses are almost impossible to get.

Meanwhile, a Beyoglu municipal official tells HDN that the only street food they will license are simits, chestnuts and corn! Nothing wrong with any of those things (well, except that most of the street vendor corn we have tasted around town is of the horse feed variety), but what about all the rest of the amazing things being sold by cart vendors (such as the desserts being sold by the vendor in the picture on the right)? Another official said it was a matter of “hygiene,” such as making sure vendors dress “appropriately,” but we generally find that the unlicensed vendors around town show up to work with a lot more polish than their licensed colleagues.

Is Istanbul really willing to shoot itself in the food in the name of “cleaning up” the streets? We certainly hope not and we will be watching to see what happens.

The HDN article can be found here [2].