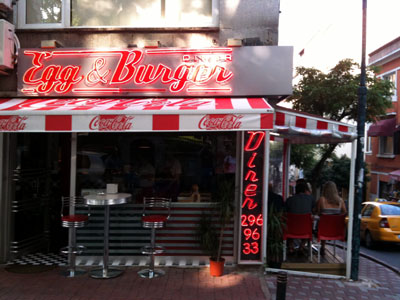 [1]
(Editor’s Note: After previous installments of our “Read Between the Buns” series — a look at Istanbul’s burgeoning burger scene — we received complaints that we failed to consider a spot called Egg & Burger. We recently had a chance to try things out there and now return with a review to add to the burger series.)

We are still trying to figure out what to make of Egg & Burger, the much-touted burger joint in Istanbul’s refined Tesvikiye district.  Decorated in black and white tiles, Coca Cola memorabilia and heavy chrome stools and tables, Egg & Burger looks just like a Checker’s or a Rally’s – that is, a cheapo grease trap with a “nostalgic American” look. There is even a neon “Diner” sign out front. But the resemblance runs out there.

At 20 TL per cheeseburger, this place is pricing itself well beyond any diner we’ve been to and into the league of the boutique burger.  Further exploration of the menu proved more confounding. The sandwich section is headed by a big taco icon. But there are no tacos at Egg & Burger. There is, however, a Spanish omlette and a bratwurst and something among the pasta listings called “fagottini”. Other things you will find at Egg & Burger (and no other diner in the world) include panini sandwiches, “ravioloni” and a hamburger salad.

Alongside a sad excuse for a chocolate milkshake, we ate our Egg & Burger cheeseburger – not bad but not great. While eating it, we couldn’t stop yearning for the real American roadside burger stand that Egg & Burger was trying to look like or the greasy spoon diner that it claimed to be. The only nostalgic moment we had during the meal was the harrowing experience of going down to the bathroom at Egg & Burger. Nudging past boxes piled to the ceiling, nodding to a fry cook on break sitting on an overturned bucket and then squeezing into a tiny dank bathroom with sticky floors we found Egg & Burger’s only bit of authentic Americana in the place: filth.

With the 27 TL per person we dropped at Egg & Burger, next time we will happily feed the entire family kofte.