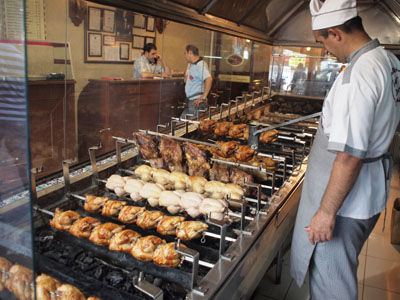 [1]
In an age where even Wal-Mart is selling ready-to-go rotisserie chicken, that simple but lovable version of roasted bird has become something of a laughable cliché, no longer seen as a cure for hunger but rather as a symptom of a society too busy to cook for itself.

Still, we remain big fans of spit-roasted chicken. There’s something captivating and utterly appetite-inducing about watching that row of trussed chickens turning on the rotisserie’s spit, like a line of self-basting chorus girls putting on their show. Let’s face it: done right, there are few things more satisfying than a golden roasted rotisserie chicken.

In Turkey, fortunately, the dish has yet to become supermarket food, for the most part still remaining the province of certain rotisserie specialists, one of the finest being Padişah Sofrasi, a roast emporium in Istanbul’s Şişli neighborhood. At any given hour (the restaurant is open until 3am), Padişah Sofrasi usually has a whole hen house’s worth of chickens slowly roasting away. For those looking for something a little more substantial, the restaurant also serves cuts from whole spit-roasted lambs, as well as kelle paça, sheep’s head that has also been given the rotisserie treatment.

Most rotisserie chicken around the world is cooked in the same way, usually left to its own devices inside a cramped, gas-fueled metal cabinet with grease-splattered glass doors. Padişah Sofrasi, on the other hand, uses something more like a free-range rotisserie: a long, horizontal bed that seems like it could have been a medieval torture device in a previous life. The meat is cooked not with gas, but with real hardwood coals that sit smoldering beneath the rotating chickens and sheep’s heads. A roastmaster, meanwhile, stands by at all times, carefully tending to his impaled flock.

The result, in the case of the lamb and chicken, is meat that is exceptionally moist with a very crispy skin. (That said, the chicken – like most roasted chickens in Turkey – is flavored with little more than salt. It’s still very good, but if we had our way, we would slip a few chickens marinated Peruvian style onto Padişah Sofrasi’s rotisserie and see what happens.) The kelle paça, served off the skull, is like a meat version of a chocolate sampler box, with the plate it’s served on holding some very tender cheek meat, slightly rubbery (in a good way) tongue, fatty eyeballs and the off-white brain. Every bite is a surprise, offering a different taste and texture, although it’s not for squeamish eaters.

As the restaurant’s name suggests, Padişah Sofrasi (“The Sultan’s Table,” roughly) is not a fast food joint but rather a place to sit down and give the roasted chicken (or sheep’s head) its due. Of course, this being the 21st century, the restaurant also understands the rotisserie chicken’s place in the pecking order: a fleet of mopeds sits outside, ready to deliver freshly roasted fowl to area residents too busy to cook for themselves.