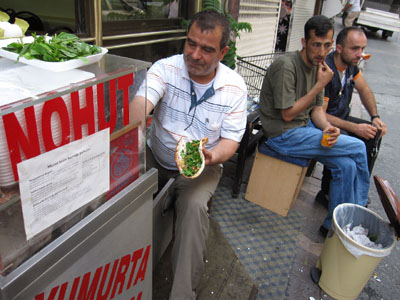 [1]
In previous posts, we’ve reported on the unusual eating habits in Turkey’s hot and dusty Southeast. In Gaziantep, we noted the “wake and flake” [2] baklava breakfast. In Urfa it was a morning dose of grilled liver. But in the town of Nizip (and elsewhere in the area), the favored first meal of the day is a thick wrap of fresh pide bread stuffed with soft, warm chickpeas.

On nizip.com, a chatboard dedicated to all things Southeast Turkish, members of the diaspora log in and bombard each other with questions on important Nizip-related subjects. Eating nohut dürüm, a savory wrap of chickpeas in pita bread, for breakfast seems to top the list of concerns for many Nizipli trying to maintain their identity in the melting pot of Istanbul.

Following a tip, we set out one morning to find Pamuk Usta, a legend among the Antep-Birecik-Nizip diaspora of Istanbul. We panicked a bit at the sight of this massive Anatolian ploughman’s breakfast, so early in the morning. Should we not split one? Pamuk Usta laughed at the idea. Just then a mailman in walked up to the stand, took a nibble of fresh greens from a plate on top of the stand and kept walking without a word.

Oh, to be the anonymous grazer! A quick handful of greens on the go seemed a much more suitable breakfast than what we were getting into with Pamuk Usta. A breakfast like this would surely call for a midmorning nap, throwing off our midafternoon siesta, not to mention totally screwing up lunch.

Over a generous portion of chickpeas laid on top of a freshly baked flatbread, our host spread chopped parsley, onions and hot peppers and sprinkled it with lemon salt. A car pulled up. Pamuk Usta pulled a bag heavily laden with already-made wraps from his cart and passed it through the window with a nod. He finished wrapping our 2 lira dürüm and handed it over.

All anxiety disappeared after the first bite of soft nohut and warm bread. The spicy peppers hung around the lips for a moment but the tang of the greens cooled things off. As we made our way through the dürüm, we fondly recalled similar breakfasts in the streets of Antep, where such a feast on foot was absolutely normal. As we finished the dürüm, we looked around at the other men gathered getting their dürüm on.

“Where are you guys from?” we asked.
“Birecik,” one said through a mouthful of dürüm. “And you?”
“America.”
“Do you eat a breakfast like this in America?” Pamuk Usta asked.
“Never,” we said.

Pamuk Usta sets up his small stand outside of Huzur Kiraathanesi every morning (except Sunday) at 7 a.m. after cooking the chickpeas over low heat overnight. He stocks the cart with fresh pide bread from a bakery around the corner. Tasty, filling and cheap, this is a breakfast on the go that anyone can get used to.

Address: Abdullah Çavuş Sokak 17, Fatih (near the İSKİ Genel Müdürlüğü and in front of the Huzur Kiraathanesi)
(Note: Pamuk usta sets his cart up every day except Sunday, 7am – 11am)