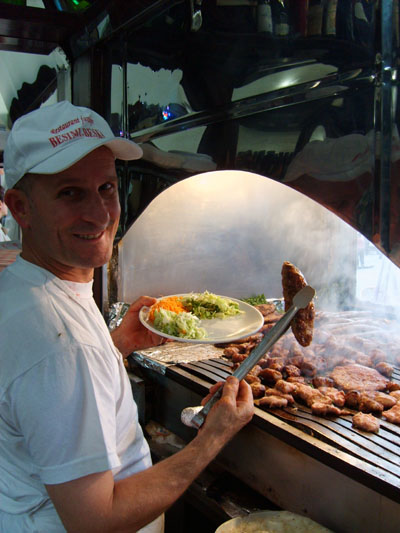 [1]
(Editor’s Note: This guest post – from the far reaches of the former Ottoman Empire – came to us courtesy of Sevin Turan, an Istanbul-based journalist and translator and a member of the Istanbul Eats team.)

“Welcome the youngest republic of the world!” This is how we were greeted when our plane landed In the international airport at Pristina, the capital city of the Republic of Kosovo. The youngest indeed – Kosovo, previously part of the former Yugoslavia, was only founded in 2008.
When people hear that you’re making plans for going to Kosovo, the first thing they say is, “Don’t forget to try the köfte (meatballs) and sucuk (spicy sausages) in Prizren.” Having heard this before, I was dreaming about the “Prizren köftesi” weeks before I went to Kosovo. But truth be told, I wasn’t expecting to be confronted by so many different variations on the theme of the chopped meat patty. It turned out that Prizren, the second biggest city in Kosovo, is all about köfte, made of the tasty and fatty meat of the Albanian lamb (seriously, this is an endemic breed).

I was starving when we went to the most hip and chic restaurant of Prizren, Besimi-Beska Family Restaurant. The sizzling sound and sight of the meat on the grill at the entrance was enough to drive me crazy. Yet, I’m sure the restaurant owners were dedicated to some sort of Tantric eating doctrine, as they first tempted us with other dishes before bringing out our köfte.

First came a Çoban salad with fresh tomatoes, cucumbers, green peppers, onions and black olives. Covered with grated white cheese and dressed up with lemon and olive oil, it was very good but not enough to fill our hungry stomachs. Along with the salad, we munched on a bit of the soft, puffy bread-like pastries on the table. Then came a soup that we named “Mama’s soup” – a chicken noodle soup with peas and little cubes of potatoes and carrots in it, just like Turkish mothers do in winter as a cure for everything.

Then, finally, it was time for us to dig into our meat plate. At the center of the plate, and at the center of our attention, was an item called pleskavitsa. This huge, torpedo-shaped patty, filled with kashkaval cheese (another local taste, another blessing of Tito’s model of economy) and cooked on a grill was a real once-in-a-lifetime experience.

Afterwards came virşle. A thin, long sausage, this one did not look or taste like the regular köfte that we know of. Although it resembeled German Frankfurters or Polish Slaskas, the virşle did not have a casing. Regarding the taste, I think thanks to the amount of onions and spices in the meat, it was like the roasted ground meat stuffing in çiğ börek.

The third and fourth varieties of grilled patties that we tried were çebap and çüfte. Do these names ring a bell? Yes, derived from kebap and köfte, their tastes were also very similar to the ones our mothers make, or the ones we eat in köfte joints around Istanbul’s Beyoğlu neighborhood. Çebap was like classic İnegöl köfte and çüfte was round shaped. Their outer shells were brown and crispy yet stabbing them with a fork, we were able to see the pinkness of the meat inside.

As a side dish, we were served with pickled white bell peppers filled with a dairy product that was somewhere in between kaymak and crème fraise.

After the salad and soup it was almost impossible for us to finish our meat plate because the food was enough for two grown-ups, yet finish it we did. Since we were told that Kosovo was an important barley producer, we couldn’t help but tried the local beer, Peja. It was nothing too exceptional, but truly better than most beer brands that one can have in Turkey. If you’re not friends with alcohol, try ayran (the yoghurt drink). It’s good, too. Finally we were brought a homemade baklava for dessert and coffee. Unfortunately the closest thing we could get to Turkish coffee was a cup of espresso, which I thought was a shame for a city where one sixth of the population is composed of Turks and Turkish is one of the official languages.

And the price? All of this for less than 20 Euros. We left the table, filled up to our nostrils, totally satisfied, and trying to figure out how much more this would have cost if we were in İstanbul.