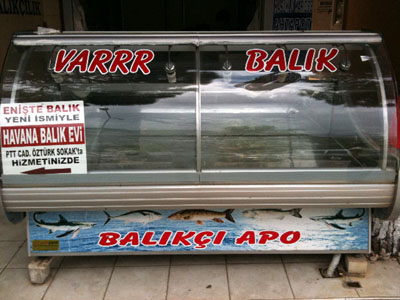 [1]
The sign on the glass cooler at the Kaş Fisherman’s Cooperative reads like a huge Bible passage on a billboard beside an interstate promising salvation, “Balik var!” We’ve got fish.

It was a promise of false hope. Inside that glass-fronted case there were no fish. Nor were there any at the fishmonger next door. Around the corner we found a few measly bream that the vendor admitted, with a shrug, had been raised in a swimming pool. Then, by chance, we happened upon a minivan stuffed to maximum occupancy with swordfish sitting upright in the back like passengers in a dolmus, but it drove off before we could strike a deal.

We’d come to southern Turkey’s Kaş for all the usual diversions – sunken sarcophagi, hot sun, blue sea – but also to test our grill skills on the fishy kings of the Mediterranean. But after a few nights of chicken and köfte we’d come to accept that in seaside Kaş, unfortunately, “Balik yok!” There are no fish.

On our final night, feeling very much at the end of our tether and wondering how one might clean and prepare one of the shaggy goats we’d seen prancing around the peninsula, we broke down and headed for the restaurant-packed Kaş harbor, hungry.

Following a tip, we headed straight for Bahce Balik, a charming fish restaurant with a patio shaded large leafy trees, one street back from the hustlers at the waterfront restaurants.

Before taking a seat, we asked, with a good measure of skepticism, about the fish. “Balik var,” we were told and led over to a glass case packed with all of the big catches of the area. We took a table.

After a round of exceptionally good meze – cabbage leaves stuffed with mussels and fragrant rice, a light curd of mashed fava laced with dill and a plate of beets the color of Barney himself – we had our first taste of the Mediterranean. The grilled octopus we were served looked frighteningly tasty – eight thick tentacles charred up at the tips yet so soft at the center that we cut it with a fork. When asked what the tenderizing secret was, the waiter responded elusively, “People ask us that all of the time.”

After much deliberation, we selected a hefty three and a half pound mercan, Pandora fish, to be grilled for the table.  It arrived split into two large pieces down the middle. A batter-like crust encased the head and clung to the exposed spine where the fish’s fat collected and cooked on the grill. Flaky, tender, juicy and startlingly fresh, this was the fish we’d been waiting to eat. The head released two oyster-sized cheeks of sweet meat, which we lingered over in place of dessert.

After all, we’d found the fish we were pining for and in great abundance.  There was so much fish on the plate that even the cats gathered around our table got a toss.

At 280 TL for a dinner for six, we could hardly do better self-catering, assuming a fish so fine could be found in the market at Kaş. On our next trip to Kaş, we’ll probably leave the grill tongs and lighter fluid at home and rely on the promise that at least at Bahce Balik, “balik var.”