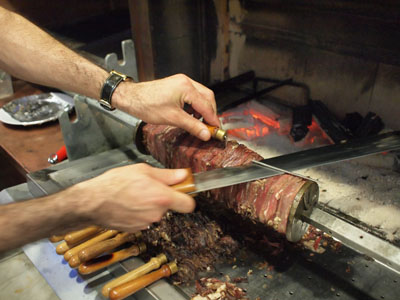 [1](Editor’s Note: A reader has written in to inform us that due to a lack of demand, this restaurant is no longer serving cağ Kebab. For those interested in trying this great meat dish, Şehzade Erzurum Cağ [2] [2]Kebabi [2]in Sirkeci is worth a try. It has great cağ and a steady stream of customers, so we are fairly certain it’s here to stay.)

We’ve written previously [2] in fairly rapturous terms about cağ kebab, a meat-lovers specialty that hails from the eastern Turkish city of Erzurum.

As human beings did, roasted meat on a spit at some point started standing up erect, resulting in the familiar döner kebab seen all over the Turkey and around the world. Cağ kebab, though, harkens back to a time long ago, when meat on a spit was cooked the way nature had intended it to be: horizontally. Is there a difference? Does cağ, made out of marinated slices of beef and lamb, contain in it some original code of kebab DNA that perhaps was lost forever in the evolutionary move towards upright spits? As Selim Bilgin, owner of Bilse Restaurant, a new cağ spot in Beyoglu puts it: “This is the father of kebab.”

Like at other cağ places, the meat at Bilse is cooked on a horizontal spit that turns slowly, the meat continuously basting itself, occasionally flaring up with a sizzle and a pop that chars an outlying corner of meat. Unlike döner, where the dönerci saws and hacks from his vertical spit, leaving the meat he has cut off lying in a puddle of grease, the cağ man carefully selects each morsel of meat from the spit with a sharp knife and a small, thin skewer. A dönerci’s work has more in common with that of a lumberjack, but doing cağ right requires the patient and steady hands of a skilled surgeon. When he’s done he’ll present you the skewer, threaded with a precious collection of tender yet crispy bites, served on top of a toasty warm piece of lavash.

Bilse opened only recently and, as fans of the meaty delight that is cağ kebab, we were very happy to stumble across it on one of Beyoglu’s backstreets. Cağ joints are few and far between, Bilse being the only one that we know of in Beyoglu, so the restaurant’s opening left us feeling assured that, for now, this ancient kebab will not become extinct.