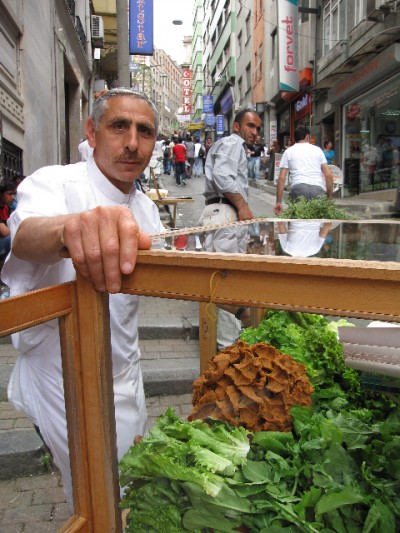 [1]
Hands stained red by pepper paste is an occupational hazard of the wandering çiğ köfte man. “Machine-made doesn’t look like this,” said Huseyin usta with the intensity of a misunderstood artist, thrusting up a freshly formed lump of çiğ köfte. Just as the çiğ köfte’s red pepper left its mark on Huseyin’s hands, the texture of his hands were equally present across the rippled surface of the çiğ köfte.

Though taking its name from the raw meat appetizer served in kebab houses, Huseyin’s cig kofte is a bulgur-based vegetarian creation. Aside from the crisp lettuce wrap, it is totally cooked, earning it the nickname “yalanci,” or “liar’s” çiğ köfte.

Everyday, for the past 32 years, the no-nonsense Huseyin has worked his secret mixture of bulgur, red pepper paste, parsley, onions and spices into moist little logs, tucking them away in his pushcart alongside lettuce, parsley and lavaş.

Huseyin’s tender loving care is a hallmark of this homey çiğ köfte. But the key ingredient is a spicy paste made from isot, an oily, almost black crushed red pepper from the Southeastern Turkish city of Urfa. All that is good about this çiğ köfte – that smoky flavor, that creeping heat – is imparted by the isot.

Huseyin pushes his cart through the streets of Beyoglu everyday selling his çiğ köfte wrapped in a leaf of crisp lettuce or rolled up in a flatbread. If you’re in luck, you’ll run across him – just be on the lookout for the man with the red pepper-stained hands.

Address: the streets of Beyoglu’s Asmalimescit, Tunel and Galata areas
Telephone: no phone