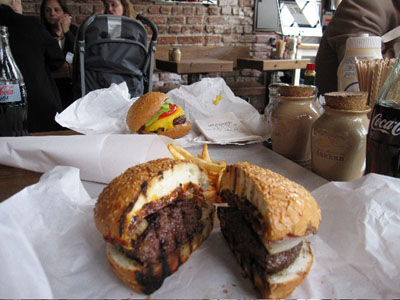 [1]
(Editor’s Note: Turkey is not unfamiliar with cooking ground meat – it is the home of köfte and kebab, after all – but hamburgers (at least the kind we’re used to) have never really been part of the landscape. That seems to be changing, though. Recently, a whole new crop of “Western-style” hamburger spots have opened up in Istanbul, giving burger lovers some hope that a new day has arrived in the city. We tried out some of these new places (as well as an old standby) and will be reporting our findings this week. Today, we take a look at two “upscale” burger joints.)

Lets call a köfte a köfte, shall we? Not a hamburger. We love köfte in all its bouncy, chewy glory, but stretch it out, flatten it down, triple the price and, presto, a burger it just ain’t. The folks over at Günaydın need to take note of this. Their burger suffers from the all too common köfte syndrome that afflicts so many other burger joints around town.

Along with Dükkan (see below), Günaydın is one of the top names in Turkey when it comes to beef. From tending to the herd, to manning the grill, they do it all with an

[2]air of professionalism. They’ve been in the beef business since the 1960’s with branches of butcher shop-cum-steakhouses in some of Istanbul’s ritziest districts. Everybody raves about the burger.

Recently, we headed out to the Etiler branch to see what all of this hamburger hubbub was about. The cheeseburger was, no doubt, meticulously prepared, with char marks from the grill forming perfect diamonds across the patty’s surface, reminding us, in appearance, of the Salisbury steak TV dinners of our childhood. The bun was fresh and toasted just to the point of being crisp while maintaining a soft embrace of the patty. The cheese was melted picture-perfect.

But a few bites into this burger we realized something was not quite there. A really good burger has some unidentifiable element that we call “burgeriness.” It could be the work on the grill, or the meat itself. Most “burgery” burgers we’ve had are served in very humble establishments; but a white tablecloth, gourmet burger can also be very “burgery.” We’re not sure what the funk is exactly, but Günaydın’s burger definitely didn’t have it.

Still, it was an enjoyable experience, though probably the most expensive köfte sandwich in town, at more than 20 TL.

Meat conspiracy stories clog the Turkish newswires – donkeys turned into kebab meat, a shipping container filled with frozen kangaroos – with such frequency that people here can be a bit touchy about the origin of what they eat.  That’s probably why a line often forms in front of Dükkan Burger, a rapidly expanding franchise started by Emre Mermer, Istanbul’s butcher to the stars. Here they take their meat seriously, translating into a very fine hamburger.

On one recent visit to the Bebek location (there are four throughout the city), we tried the cheeseburger and the Dükkan Burger, along with an order of Dükkan’s excellent sausage links and a cone of French fries.

The cheeseburger looked like something out of a Norman Rockwell painting – lettuce slung akimbo, bright red slice of tomato, glowing yellow cheese, patty, sesame seeded bun with a charred rim. An “all-American” burger, and it tasted the part.

If the cheeseburger was of classic construction, then the Dükkan Burger (pictured at the top of the page) was their attempt at something postmodern. After grilling up a 200-gram patty and toasting the bun, they assemble the burger with a generous heap of “bacon” (made out of beef), mild white cheese and grilled onions. Then they split the whole business down the middle and subject the open halves to a final flaming on the grill.

This behemoth of a patty withstood the final charring without drying out or overcooking. It was still hemorrhaging juice when it arrived at our table on butcher paper. We slathered Dükkan’s house mustard right onto the gaping face of the patty and went at it.

Despite the delightful smoky dominance of char in this burger’s palate, something salty and deli-meat-like kept getting in the way of us absolutely loving this one. It was the beef bacon. The sweetness of the onions charged and retreated throughout the eating of this burger. The cheese is utterly lost, though. Perhaps it was included only for its adhesive properties. The bun was another excellent vehicle for delivering grill smoke to the table, standing firm but not obstructing the business of the rest. In fact, almost every bit of this burger was on point, from the juicy patty right down to the sinus-opening mustards. If it weren’t for the meddlesome “bacon,” which caused us to first recoil, then remove it entirely, this might have been our favorite burger in town.