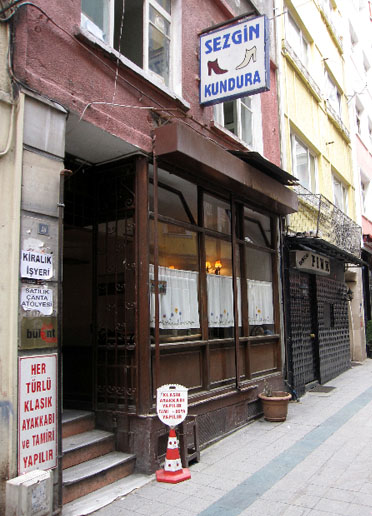 [1]
In Istanbul, the plight of the öğrenci, or student, is felt by most vendors. “C’mon, we’re students,” is a familiar bargaining mantra that applies to the purchase of a jean jacket, bus tickets and just about everything in between. No need to pull that routine at Üçüncü Mevki, a homey restaurant on a Beyoğlu backstreet: Here, everyone benefits from generous portions and a built-in student discount.

A meal at Üçüncü Mevki usually doesn’t last longer than 15 minutes or cost more than 15 TL. The bustle of young backpacked diners scrambling to scribble their orders on little chits of paper that are sent right down to the kitchen on a dumbwaiter gives us the sense that we have arrived at a serious eating source stripped of all fluff that often clutters the process.

There is something comforting, if not culinarily spectacular, about the food here; something like a favorite but unflattering hand-knit sweater. The hot grape leaves stuffed with rice and ground meat are usually triangular but more often than not have ruptured and gone rhombus – all the better for spooning up with the yogurt that has run amuck in the bowl. The “Mexican” potatoes, fried and then smothered in a red gravy, are very tasty but don’t prompt any visions of Oaxaca (or even spring break in Cancun, for that matter). Along with novelties like the Mexican potatoes, the standard dishes here are consistently excellent. A spicy lentil soup called ezo gelin is popular enough to keep the windows of this small eatery fogged up throughout the evening. A side of chickpeas served over rice – as heavy as it sounds –  was surprisingly delicate.

If room remains, we suggest one of the puddings for dessert – they are better than anything in a school cafeteria and probably just as cheap.