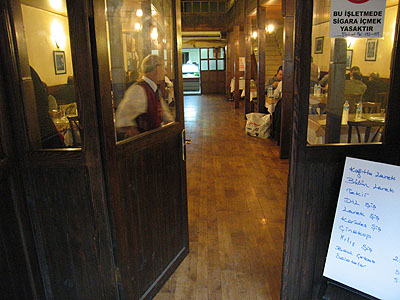 [1]
Just as we thought we had managed to break out of our Beyoğlu dining rut, we found ourselves once again trawling the neighborhood’s streets for places to eat. To be more specific, we found ourselves walking along Mumhane Caddesi, a street in the waterfront Karaköy area that has so many good restaurants along it that it acts as a kind of culinary vortex, radiating a magnetic pull that we find hard to resist.

This time around, the street’s siren call was İstiridye Balık Lokantası, an old-fashioned fish restaurant that caters to a lunchtime crowd of local office workers and executives. Karaköy, once a busy port area, remains a mostly commercial zone, with elegant buildings housing shipping and holding companies. The people who come to İstiridye expect the restaurant to serve food whose quality doesn’t vary from day to day, because, it would appear, many of them seem to come here every day.

İstiridye had intrigued us over the years; we had always walked by but never gone in. The entrance, with its dark wooden façade exuding something of a private club aura, seemed less like a doorway and more like a portal into another time and era. On the other hand, the prices listed on the dry-erase board at the front – 20 liras for a swordfish kebab, for example – seemed firmly 21st century.

Nonetheless, the stomach is always stronger than the mind and through İstiridye’s doors we came on a recent lunch break. Inside, we found a rectangular-shaped dining room with dark wood beams supporting a wraparound balcony, looking something like a cross between an Old West Saloon and a Ukrainian village wedding hall. Serious-faced waiters in crimson vests and crisp ties hustled about from table to table.

The menu was basic. A chowder-like fish soup (delicious), green salad and a small assortment of fresh fish, most of them – perhaps so that the busy clientele don’t have to work too hard to eat their lunch – deboned, skewered with green pepper and onion and grilled over coals. We opted for the dil şiş, thin strips of flounder that are rolled up and grilled on a skewer. The fish was superb, the outside of the rolled-up fillets slightly charred and crisp, the inside moist and tender. The table next to us ordered levrek şiş, large chunks of sea bass fillets that were also skewered and grilled, and which also looked very tasty.

We finished our meal off with nothing more than a simple glass of tea, delivered from a nearby teahouse by a worker who dutifully stood at the entrance to İstridye and waited for one of the waiters to take the tray from him, as if he knew that crossing that threshold meant something more than simply entering a restaurant.